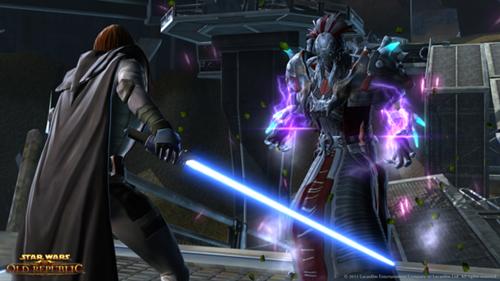 Issue 103: The Force is our ally and a powerful ally it is. As you may have guessed there is SWTOR news down there today. It makes me happy and excited to be playing SWTOR. On these hot and humid days of summer, while we wait for Blizzard to move their collective asses getting the next expansion deployed, its nice to have something interesting to do. Are any of you doing anything different while we wait, albeit impatiently, for Warlords of Draenor? Somehow I have missed a new MMO called Skyforge, have any of you been looking at this title?

So this issue we have a couple of interesting posts to read instead of the usual “look what’s coming soon” kind of headlines. I hope its a pleasant change for some of you. There are details about the Hearthstone adventure pack (which is now live), SWTOR and WoW game news, also the SDCC is coming soon.

I have a quick World of Warcraft PSA, this week you can get the Iron Skyreaver mount from the pet store for 40% off ($15.00). Enjoy!

Posted 7.17.14- In a previous MMO Times I had a headline that told players about the Hearthstone Naxxramas Adventure Pack coming soon. In Blizzard’s traditional definition of “soon” (which means it could be in a couple of weeks or 6 months), July 22nd is the launch date. The first wing, Arachnid, will be free for everyone playing the game. The remaining wings will need to be purchased (once they have been made available). I’m not much of a Hearthstone player (unless there is a mount to unlock), but this does seem pretty cool. What do you all think? [Update: 7.22 – Launch Trailer]
Massively post

Posted 7.18.14 – I love the graphic that is associated with this Massively post. In fact I’m giving SWTOR this plug because so many people were calling it a failure. Clearly they are wrong. I actually recently reactivated my SWTOR subscription because of all the new features the game is adding that are only available if you are an active subscriber. The statistics ranks SWTOR higher than RIFT and Guild Wars! So take that naysayers! The Force Is Strong with SWTOR!
Massively post

Posted 7.21.14 – I thought there was an NDA on the Warlords of Draenor alpha/beta testing but apparently there isn’t. This article was a pretty interesting read, though a little disappointing if you, like me, are really interested in the garrisons mechanic. If you read through the article I think the process of building your garrison seems to be off to a decent start, but how the player utilizes the garrison needs some refinement. I think the biggest point the author makes is that Blizzard alleges that you can use your garrison without impeding your leveling experience, however, you must stop leveling to return to your garrison to issue orders. I agree, that seems a little cumbersome and contrary to what Blizzard has been saying. It’s a pretty  long article but if you are curious about the garrisons, its probably worth a read.
Massively post

New Heroes of the Storm Hero

Posted 7.22.14 – Although Heroes of the Storm is still in alpha/beta, Blizzard unveiled a new hero that has been added to the game: Rehgar Earthfury! Judging by the author’s comments in the Massively post, they are a little surprised that Rehgar was the Shaman hero picked (since the Shaman is such a iconic Warcraft class). I mean, “Helloooo! McFly!” Thrall is the most well known Shaman in WoW. Regardless, Rehgar should be a fun hero to play.
WoW Insider post

Posted 7.24.14 – If you are curious about the Warcraft movie that is currently in production, some logo and props were revealed recently. The logo can be seen when you visit the WoW Insider article but to see the Doomhammer and Stormwind sword and shield props you will need to follow one of the links contained within the article (which is totally worth it!) I’m with the author, I don’t expect a whole lot from games that are adapted to movies (i.e. Tombraider – though who really wanted it for the plot 😉 ). What do you all think about the Warcraft movie?
WoW Insider post

Posted 7.24.14 – You read the right, a playable Dragon class! Well a dragon/humanoid class, or something like that. The bad news is that you will have to pay for the new Dragonborn Pack in order to unlock the new race (which is, conveniently, called Dragonborn). You will have to wait until August 18th before you can play a Dragonborn, that is when the pack goes on sale.
Massively post

icon indicates that the link includes a video that accommodates the post. I also provide The MMO Times in an e-mail. If you are interested in receiving the e-mail version please click here to subscribe.