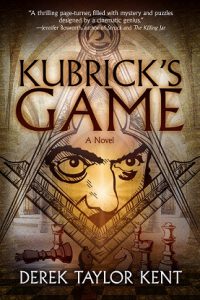 Have you ever finished reading a great book that you enjoyed so much you have to tell everyone about it? The problem is you don’t know where to start. It was a problem I faced after reading Ready Player One, and it’s the problem I am facing after finishing Kubrick’s Game. Coincidentally Kubrick’s Game has been compared to Ready Player One, and rightfully so. It’s another puzzle-adventure novel whose clues and characters will keep you turning the pages.

Kubrick’s Game is about a brilliant UCLA film student named Shawn who receives a very unusual package. The contents will take him on a quest to solve a puzzle left behind by the late Stanley Kubrick. The answers he seeks are buried in the legendary filmmakers movies and his life. A prize awaits the first person that completes the game; a prize that will “change the course of history”. Shawn’s task isn’t going to be easy, there are other nefarious groups also on the quest and trying to stop him.

A Book For The Movie Nerd

I am a huge movie nerd and I love a great movie so I appreciate Stanley Kubrick’s films. Granted I haven’t seen all of them, but just a couple of chapters into this book and I was ready for a marathon! Many times I thought about popping in 2001 or The Shining just to see the clues for myself. Throughout the whole book I was trying to anticipate how it will end and what the prize will be. Just when you are convinced that you know what is going on the author throws in a twist as clever as Stanley Kubrick himself, and your mind is blown. A part of me was waiting for the cliché reward at the end but instead, it’s perfect. It’s a prize worthy of the puzzle and the man who created it. 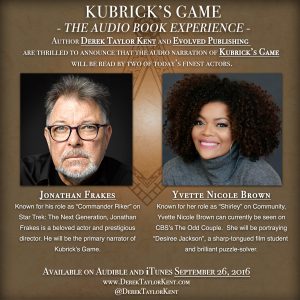 I had the privilege to read Kubrick’s Game before the publish date (on September 26th) and it’s definitely comparable to Ready Player One and other great puzzle books like The Da Vinci Code. The author uses a perfect balance of fiction and non-fiction similar to writers like Ernest Cline and Dan Brown. He collaborated with the founders of The Fantastic Race to create the film-based scavenger hunt. By the end, Kubrick’s Game easily claims a spot in my top 5. If you love movies, and especially if you love Stanley Kubrick’s films, then this book is a must read!

If audio books are more your speed then the treat gets even sweeter. Jonathan Frakes, Star Trek’s Commander Riker, provides the narration with Yvette Nicole Brown providing the voice of Desiree Jackson. The audio book will also be available September 26th on Audible and iTunes.

4 Responses to “Read Kubrick’s Game, You Will Love It”