Thoughts and ponderings about PC and consoling gaming.

WoW: On the Eve of Dragonflight

In Gaming, MMORPG, World of Warcraft

Well folks, here we are. We are on the eve of Dragonflight, Blizzard’s 10th World of Warcraft expansion. I have moved all my toons out of Oribos and back to their respective capital city. As we return from saving the afterlife and begin our adventures in the Dragon Isles, let’s do an expansion character recap.

Being the nerd that I am, I have a spreadsheet in Google sheets to track my goals all through the Shadowlands. I began this spreadsheet during Battle for Azeroth but kicked it up a notch during this expansion. Many have already told me that there are addons that will do a lot of this for me. I appreciate the suggestions but I enjoy doing it my way instead. I am going to use that spreadsheet to discuss my Shadowlands progress. You’ve been warned that this post will be a little data-heavy.

END_OF_DOCUMENT_TOKEN_TO_BE_REPLACED

WoW: Return from the Shadowlands

In Gaming, MMORPG, World of Warcraft

We are at the end of another expansion. I cannot believe I will soon be entering the 10th expansion of this game. While I have taken a couple of breaks, here and there, I have played through all of the content of each expansion since I started playing back in Vanilla. Not Classic! Classic is not as good as Vanilla on any day. As our heroes return from the Shadowlands, let’s reflect on this ninth expansion.

Keep in mind that, as I am writing this, the pre-patch has not yet launched. However I do not expect the events of the pre-patch to affect my final thoughts of the Shadowlands expansion. In my opinion, the pre-patch is content that is linked to Dragonflight and is, therefore, exempt from this expansion.

END_OF_DOCUMENT_TOKEN_TO_BE_REPLACED

I am a big fan of Rebel Force Radio (if you are a Star Wars fan, I highly recommend listening to them each week). During the July 15th broadcast Jason and Jimmy interviewed Kyle Newman and they talk about this movie. If you have seen the movie Fanboys then you are familiar with Kyle Newman’s work. First a quick synopsis then my 1Up review.

Vivian (Paris Berelc) is a “support” member of an elite eSports college team. After an egregious display of ego and male chauvinism, she quits the team. She forms her own, female only, eSports team with the help of Parker (Ruby Rose) to coach them against a male dominated industry.

This is another one of those movies where it’s more like 3 1/2 stars but since the plugin doesn’t allow 1/2 stars, I generously gave it a 4. It is getting destroyed though on IMDB. So much so that I almost didn’t add the link to the website. I, honestly, don’t think this movie deserves so much harsh criticism.

I admit that it’s a little campy but I feel like it’s campy along the same lines as Fanboys. It’s not a unique plot. In fact this is basically the same movie as Pitch Perfect except using video games. The writers and director do embellish the actual game play a little bit, but I don’t think it ruins the movie. It’s a decent “David Denise? vs Goliath” flick.

During the first act it does, kind of, abuses the very stigma it’s trying to abolish. Paris Berelc is a “well endowed” woman and we see her frequently in a white tank top where her … “goods” are right in our face. Ruby Rose’s character even addresses the fact that, over the years, “boobs” sell video games. I feel like from that point on, however, Berelc’s wardrobe is a bit more modest. Perhaps that is on purpose.

The movie comes at a time where women are being challenged and/or ridiculed for wanting to feel welcome in a male-dominated industry. Especially on the heels of the Blizzard fiasco. It goes without saying that gaming and eSports has largely been tailored toward males for the better part of a generation. This movie challenges that and I’m on board with it. Women should feel welcome and safe in the video game industry. A penis is not a requirement for playing (or developing) MOBAs, MMOs and eSport games.

If you are a gamer and/or in the video game industry, then check it out. Keep an open mind but your expectations low. It’s not a masterpiece and certainly not as good as Pitch Perfect but I still enjoyed it (boobs aside). It does have a few subtle Star Wars references (not just the Jedi/Padawan reference, let me know if you catch it).

In Biggs On, Gaming, Microsoft, Technology

The gaming community was rocked today when the news broke that Microsoft acquires Activision Blizzard. Assuming this deal actually goes through, and the DOJ doesn’t intervene with another antirust investigation, how does this affect me? I’m quite vocal about my distrust and distaste for anything Microsoft. This news makes my toes curl.

However, Activision Blizzard hasn’t exactly been a paragon of virtue. While Microsoft has their faults, their employees are not running around groping co-workers. I have respect for a company that provides some innovation, but I cannot respect a company that exhibits such disgusting behavior.

Maybe This Is The Right Change

Activision Blizzard has been struggling for over 6 months now to repair the damage caused by the scandal. During that time the community suffered and many players, including several of my friends, have left the game. After every step forward, new information is found, and we go two steps backwards. Perhaps this is the dramatic change that needs to happen to rectify the sins of the past.

I’ll admit, I was feeling dead inside when the news broke. My wife had an interesting way to explain it though. It’s like when Disney bought Star Wars. At the beginning I had mixed emotions, but now I’m overjoyed. I hope Microsoft makes the right changes to repair the community and bring the game back to life. I imagine Microsoft will be cleaning house of all the people that should have already been fired.

I’ll admit, the gaming division is the lesser evil at Microsoft. As long as it’s XBox that runs the show, I will be cautiously optimistic. My biggest concern is if Microsoft can’t fix the damage. World of Warcraft is the longest running title at Blizzard but its been hemorrhaging players and money for a while. If Microsoft cannot stop the bleeding, WoW might be the first to go.

I’m hoping for the best.

It’s been a while since I’ve done a “State of the Raid” post. Blizzard is kind of a sore, perhaps even taboo, topic right now. Every time there is more sickening news makes me sad.

I play this game to hang out with the friends. The kind of friends where hanging out in person isn’t convenient because of distance and borders. Raiding has become difficult over the past few months. Some friends have left the game and recruiting new people is difficult.

Despite these circumstances, we are enduring. Personally I think our goals are shifting to accommodate the reality and current environment of the community. Ahead of the Curve has always been our main objective before the conclusion of a tier. This rut in active players and the obvious adjustment in the difficulty of heroic encounters may be changing that objective.

As much as I hate to let go of achieving Ahead of the Curve, I think it’s best for my sanity. I really don’t want to burn out because this is my social activity. Several of my friends have already reached this point so I don’t want to be the next victim.

We are currently 6/10 in Heroic and our latest attempt on Guardian has me feeling confident we will be 7/10 soon. Depending on the complexity of the next 3 bosses, and the release date of 9.2, we may still have a chance at AOTC.

There is so much to do after you hit max level that I’ve had a difficult time leveling my alts. I’m still sitting at just under half of my alts at max (46.6%). I’ll admit the events going on at Activision Blizzard is awful and gives me a lot of mixed feelings which affects my motivation. I won’t quit though, for reasons I’ve expressed before. This time of year is also very busy for me. I’ve got lots of planning, decorating, and Christmas to enjoy.

While Blizzard has not given us a release date for 9.2, my hope is try to get to as close to 100% on all my alts before it hits live servers. That’s probably a stretch goal by now.

Ultimately I hope Blizzard gets their act together and finds a way to bring players back. I really miss all my friends that have left the game.

If zombies attack the world, everyone will run and hide. Except for us gamers, of course. We've been waiting for this all our lives!

How long have we been waiting for the 9.1 patch? Shadowlands released on October 13th and the patch comes out tomorrow. So that’s approximately 260 days! I’ll admit, if I didn’t have alts I like to level, I would have suspended my account again and played something else. Yea, yea, “but the pandemic!”. I work as a developer too in an enterprise environment and we work just fine remotely. In fact we haven’t pushed a deadline or missed a deadline during the whole pandemic. Using the pandemic as an excuse isn’t valid to me. 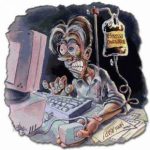 A Month Ago Or A Week Later

Then Blizzard finally announces the release date of 9.1; which is tomorrow. However the new mythic dungeon and the raid won’t be available until the week of the 4th of July holiday in the U.S. In general I don’t think Blizzard should be releasing patches in the summer because that is the most popular time people take vacations. I know, that’s selfish. I’m frustrated because I swear Blizzard knows my vacation schedule. It never fails they always release a raid at the worst possible time for me.

When would I have liked to have seen the patch? A month ago! At least! Granted I was trying to level as many alts as I could before 9.1; but I would have rather gotten a decent start on the content before a vacation. I would have been content if they released the patch next week (with the raid starting the following week). Since even Tazavesh isn’t available until the same week, the only content to work on is flying and furthering Covenant Renown.

And no, I refuse to play Classic. I’ve already done that and I never wanted to go back and do that shit again. Maybe if you hadn’t wasted all those developers are this Classic crap, 9.1 could have been finished sooner. It’s called “prioritizing!”