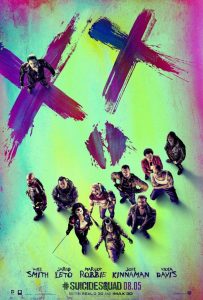 It has been a while since my last movie review post. Batman vs Superman (BvS) may have been the last one I did so it’s serendipitous that Suicide Squad is next. I can’t believe there was no warning that you should see BvS before you see Suicide Squad. It picks up shortly after the events of BvS so you should watch that first, if you don’t want a spoiler.

Suicide Squad is esoteric to comic geek canon. In other words, if you are not familiar with DC villains then you probably have no idea what the “Suicide Squad” is. The Joker (Jared Leto) will be the most recognizable name among this motley crew. Those that are slightly more enlightened will recognize Harley Quinn (Margot Robbie). The lesser known villains in this movie are Deadshot (Will Smith), Killer Croc, Boomerang and Diablo. They are all villains that have been captured by either Batman or The Flash, both of which make cameo appearances.

When the kind of justice Gotham needs isn’t the kind Superman or Batman are willing to provide, a new kind of vigilante is needed. The most dastardly of Gotham’s villains are locked away and forgotten. However, assembling the right group of them will provide a set of skills that can thwart meta-human terrorist threats. The trick is, how do you control them so they don’t start their own terrorist plots.

Don’t Believe All The Critics

Despite what many other critics and movie goers have been saying, Suicide Squad is a good movie. Granted I am not a big DC comic nerd or pundit. I don’t know how well each actor portrayed their respective villain as it pertains to canon. Will Smith is the biggest name in the movie and I’m glad he didn’t turn it into “The Will Smith Show”. He did share the spotlight well with the other characters, especially Margot Robbie. There is good chemistry between Deadshot and Harley Quinn, and the rest of the crew to be honest. So with that said, I think Suicide Squad is a better movie than Batman vs Superman in terms of plot and the quality of the acting.

One final note. I firmly believe that the music makes the movie and this wouldn’t be a “Biggs Movie Review” if I didn’t comment on the music. Keep in mind that I am referring to the score soundtrack and not the album soundtrack. The film’s composer is Steven Price and an hour into the movie I began wondering if it was available on iTunes. The mood of the music matched the mood of each scene perfectly. When you don’t realize that you have been completely bewitched by a scene, that is a sign of good music. Hats off to Steven Price.