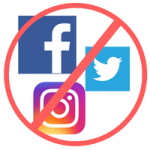 Some folks may have noticed I’m not posting that much on Facebook and Twitter. I’m not sick. I’m not in protest. I’m taking a break from all social media. I thought about saying something in a tweet or a wall post but then that would be using social media. Therefore, to avoid the dilemma, a brief blog post would suffice since WordPress auto-posts to Twitter and Facebook. In fact anything you see on either of my feeds will be generated posts.

I’m not gone permanently; at least I don’t think I am. In my 2019 intentions post I mentioned I would be trying to use social media less because it causes too much stress. Facebook and Twitter are toxic and I hope to feel more relieved by late April that it’s no longer something I feel compelled to check. I seek nobody’s approval and that’s all social media is. Everyone behaves like children seeking attention and approval by behaving badly.

In the meantime I can get my news the old-fashioned way. Google. I’ll see you all in a few weeks. Until then you can email me, text me, or (heaven forbid) call me.