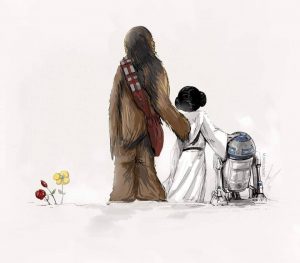 Why do I find it so difficult to talk about the passing of a man I never knew but who was also a huge part of my life? Last week we lost our favorite Wookie. Peter Mayhew portrayed our beloved Chewbacca through 40 years and 5 movies. Chewie was more than a character to Peter, he was apart of who he was (much like C-3PO is to Anthony Daniels, except maybe not quite as eccentric). It’s so easy to forget that the actors are not as immortal as the characters they have brought to life. While the characters will live on forever losing someone like Peter Mayhew (or Carrie Fisher and Kenny Baker) still feels like you lost an awesome family member whom you never met. It feels trite but suffice it to say, thank you Peter Mayhew; thank you for making Chewie real for us.

Chewbacca is probably the most beloved character in the Star Wars franchise and among the best characters in the history of film. It’s hard to choose a favorite moment because Chewie has so many of them. Peter portrayed Chewie in five of the Skywalker Saga films (Revenge of the Sith, A New Hope, Empire Strikes Back, Return of the Jedi and The Force Awakens). If I have to pick a favorite moment and, given that my favorite movie of the saga is Empire Strikes Back, then it’s when Luke is preparing to leave and bids Han and Chewie farewell, Chewie suddenly hugs Luke. It always brings a smile to my face.

I have been to two Celebration events, 2002 and this year (2019); and at both events I saw Peter Mayhew, but just in passing. In 2002 he was walking around the convention floor, on his way to his autograph session. He would stop occasionally to take pictures with fans, always with the same goofy smirk you often see in all his convention photos. I regret never signing up for a picture or autograph. The picture on the left is one I took as I was passing by his autograph session. My daughter tells me he turned and smiled at her before we walked away.

He was the gentlest of giants-A big man with an even bigger heart who never failed to make me smile & a loyal friend who I loved dearly-I'm grateful for the memories we shared & I'm a better man for just having known him. Thanks Pete #RIPPeterMayhew #Heartbroken @TheWookieeRoars pic.twitter.com/8xbq9HEWF2

As you can see the actors that knew him well had wonderful things to say about Peter. A “gentle giant” that loved his work, loved the franchise and loved his fans. It’s sucks saying good-bye but, as Luke said, “Nobody’s ever really gone”.

Thank you Peter Mayhew and May the Force Be With You.