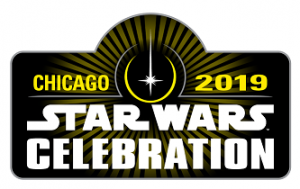 I have been looking forward to the Star Wars Celebration for two reasons. First, the last one I went to was 2002, when it was in Indianapolis for the release of Attack of the Clones. Second, its in Chicago this year, my favorite city. Ultimately the best part of the going to the event was bringing my five-year old daughter. This is my Chicago Star Wars Celebration experience.

I don’t think I need to go into the big news. Everyone who cares should already be aware of the release of the first trailer and the title. I did not get to sit in on the panels since I only had a day to absorb as much as I could while keeping a five-year-old entertained.

A Little Leia Changes the Experience

When I went back in 2002 I was just this nerd wandering around the convention center taking pictures and getting autographs. I seemed convinced my experience would be the same except now my daughter would have to endure it. I was completely and utterly wrong! She dressed up as Princess Leia, and apparently a five-year old Leia is as popular as a celebrity. (Sorry, pictures will only be available for friends and family). 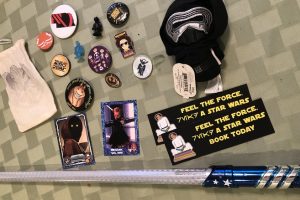 This is all the free stuff she got

She was constantly receiving free stuff from vendors and random fans, including fans from other countries. She was getting requests to be photographed or to be in a picture with other people attending the convention. As shy as she comes off, I think she secretly enjoyed the adoration. I cannot express how humbling and amazing the Star Wars fans were at this convention and it really made my daughter feel special. If this experience doesn’t make her a Star Wars fan, then I’ve done all I can do.

Even the celebrities seemed enchanted with her. We got to have our picture taken with Greg Grunberg (Snap Wexley) and Donald Faison (Hype Fazon). When it was our turn, she was the first to approach and both guys welcomed her with open arms and addressing her as “princess”. Greg Grunberg helped her pose so her lightsaber wouldn’t be in front of her face, and he stood just right to comfort her. After the picture he asked the crowd for applause. Amazing. Donald was equally as amazing. After the photo was taken, she walked away ahead of me and he yells out “Bye Princess! I miss you already!”.

The Cosplay Is Amazing!

You hear stories of incredible cosplay at these conventions. Comic-Con, BlizzCon, Celebration; but nothing prepares you when you see it with your own eyes. At the Celebration this year, easily more than half the people were in cosplay or costumes (including yours truly). The originality of some of the costumes is simply astounding. I’m not ashamed to admit I felt inadequate compared to some of these people. I saw plenty of Stormtrooper, Darth Vader, Leia, and Rey costumes, but its the more esoteric cosplay that really stands out.

I saw a very impressive Cad Bane and Emperor Palpatine (see below). I saw a Mon Mothma, a TLJ-styled Luke Force Ghost (that even Mark Hamill liked), a Max Rebo, Asajj Ventress, and a cleverly disguised Matt the Radar Technician. Below are only a few pictures of the great cosplay, I wish I had taken more.

Next year there will be another Celebration event, probably for the 40th anniversary of Empire Strikes Back. Unfortunately it is in Chicago again, but Anaheim. As much as I would love to finally see Los Angeles and DisneyLand, I doubt I can afford the trip (much to my chagrin). I’m still going to watch the hotel and ticket pricing closely as more details become available. Maybe I can start some kind of online fundraising or start selling my possessions.