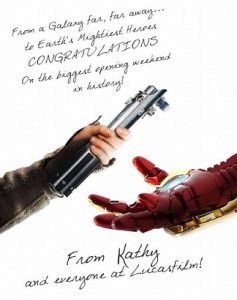 It surprises me that someone hasn’t gloated to me about the insane box office numbers Avengers: Infinity War is generating. I’m not going to lie, there is a small bit of jealousy but, to be honest, I’m happy for Avengers. Disney is doing some amazing work with the MCU! I’ve always been a Marvel fan, probably my second favorite franchise (albeit a very distant second). I have just as much enthusiasm for its success as I do for any Star Wars film (which can be rare for some “fans”). As fans of nerd culture, there is no remorse for the dethroning of The Force Awakens by a comic book movie. Ultimately, Star Wars will profit from The Avengers box office success.

Marvel Cinematic Universe is apart of Marvel Studios which is [1]“a subsidiary of Walt Disney Studios, itself a wholly owned division of The Walt Disney Company“. Also a subsidiary of Disney is Lucasfilm and the entire Star Wars franchise. This Avengers movie marks the 10th year of the Marvel film franchise. Suffice it to say, Marvel movies have already peaked and are likely winding down. Star Wars, on the other hand, is just getting started. Therefore its only logical where all the money the Avengers (and other subsequent Marvel films) will be heading.

Yes, we have the Ant-Man sequel, Avengers 4, Guardians of the Galaxy 3, and Captain Marvel where that money will also be used. Ultimately, however, all the profits benefit The Walt Disney Company media conglomerate as a whole. This is a 2-way street; I’m sure the 900 million dollars in domestic box office earnings from The Force Awakens is partially allocated to Marvel Studios. I know they are different subsidiaries but the bottom line is, both franchises affect the same stocks.

Monetary reasons aside, neither franchise should be battling for supremacy. Let’s be honest, in high school if you liked Star Wars or comic books you were labeled a nerd. Isn’t it ironic that 20 years later that is all everyone talks about. It’s the only thing everyone is going to see in the theaters. The nerd connotation these franchises induced makes them brothers by association. As such, we need to be embracing each of their successes in the box office. Competing seems like pointless bickering. After all would you rather Star Wars and Marvel hold the top spot, or some romantic drama (or worse yet, a DC movie ?)?