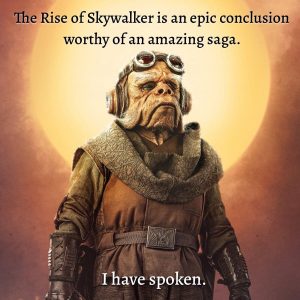 This Is Not A Review

I’m not going to write a review for The Rise of Skywalker. My loyalty to the franchise creates a bias which doesn’t provide you with accurate incentive. The only suggestion I have is to ignore everything you read on Facebook and Twitter. As with any movie you need to try to go in with open eyes and open expectations. I know that’s hard to do with so much toxicity from myopic fans and critics. Also, as with any Star Wars film, I think this movie falls under the “critic proof” classification. It wasn’t made to win an academy award.

It wouldn’t matter to me if this movie only made a million dollars or if it makes a billion dollars; I love it. It’s an extremely satisfying end to a sublime saga. Regardless of the box office tally, the critics and the dissenting fans, Star Wars is more than a movie to me.

Star Wars Goes Beyond The Movies

There are fans that just watch the movies and there are fans that indulge beyond the movies; I am the latter. I was about 8 years old the first time I saw Star Wars, and I don’t think my parents quite realized what they had started when those yellow words first appeared on the screen. These films not only fuel my fascination with how movies are made but also my love for science fiction and fantasy.

Star Wars is also a unifying bond between family and strangers (assuming we can all agree to disagree on controversial subjects). When I attended the Star Wars Celebration last April, I felt welcome in a sea of strangers. However, we were all there for a common purpose, to celebrate the franchise we all love. In fact I would go so far as to say I was more comfortable among 10,000 strangers than I am among 30 members of my own family. It’s an indescribable sense of community.

I’m trying to put into words why my enjoyment of Star Wars goes beyond the movies. I’m struggling to explain it in more relatable terms. It’s like talking about sports. You cannot control the outcome of any sporting event (as a spectator), but you can regale about the past or imagine possible futures. Also, the more knowledge there is between folks the greater the enjoyment and a more interactive dialog.

I’ve played many of the games (video games and board games). I’ve watched many of the other series and I’ve read many of the books (novels and comics). There is so much to enjoy about this franchise than what you see in the theaters. Perhaps this is the reason I can find so much enjoyment even in the movies other folks like to disparage. Perhaps this is why I enjoy involving my family, including my daughter, who is just beginning to experience it herself. The amount of official canon outside the films is almost endless (I’m excluding fan-fiction and fan theories).

The divisiveness of the fanbase now is practically a microcosm of our country’s political state. We are too busy trying to tell the other side what is wrong with their point of view. Nobody seems interested in digging deeper into the details to find there might actually be common ground and facts to support it.

I invite anyone who has canonical issues with any of the movies to reach out to me, especially if your knowledge is limited to just the films. I’d love to have an open and honest dialog about it and see if we can’t come to some kind of mutual appreciation. I’m not going to try to change your mind, but I do hope you will see why I love Star Wars to the most minute of details.