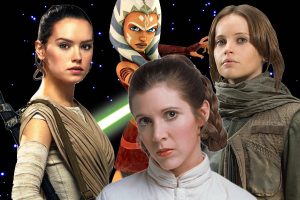 When I was growing up, typical boy things were G.I. Joe, He-Man and Star Wars. The typical girl things were Barbie, baby dolls and My Little Pony. The world has changed and while G.I. Joe and He-Man are lost in time, Star Wars is stronger than ever – thank you, Disney! The interesting thing is, Star Wars isn’t just a “boy thing” anymore. Disney and Lucasfilm has successfully altered the perception with the right character placement and new protagonists. I’m glad it doesn’t feel forced (no pun intended); it’s very casual but very deliberate. As a result Star Wars is more gender neutral.

A Story About A Little Girl

The inspiration for this post comes from something I read a few months back. I thought it was a pretty cool story, but became more inspired by it when my 4-year-old daughter began showing more interest in Star Wars. A woman posted a tweet about her 7-year-old daughter crying in her room. She’s crying because she loves Star Wars but she’s scared she will be laughed at because Star Wars is a “boy thing”. I can certainly sympathize with this mother’s concern.

Just tell her to feel free to use this gesture if her classmates give her any grief. “Boy stuff”? PLEASE! The Force is, & always will be strong with females here on Earth & in galaxies far, far away.
♥️- mh pic.twitter.com/lAI4AGr0sc

As I already mentioned, perhaps 20 years ago Star Wars was “boy stuff”, but all that has changed.

Originally we only had Princess Leia. Her wit and snarky personality immediately made her one of the most endearing princesses in science fiction. Then we got Padme when the prequels came out, followed by Ahsoka with the Clone Wars animated series. Of course the new trilogy has Rey, probably one of the most powerful Jedi yet, and Rogue One has Jyn Erso (brilliantly portrayed by Felicity Jones). All five of these women are powerful and brilliant role models for young ladies!

It isn’t just the Clone Wars animated series that brings powerful females into the Star Wars Universe. I’m sure you have heard of Star Wars Rebels which features two more powerful women: Hera and Sabine. Then Disney does something that is absolutely brilliant; Forces of Destiny. If you haven’t seen these short webisodes then go check them out. I think there are about 20+ right now and I believe more are coming. They focus specifically on all of the women mentioned above. My daughter loves watching them, and I think they are pretty entertaining as well.

The introduction of Ahsoka was the catalyst for more feminine influence. Ashley Eckstein is the voice for Ahsoka Tano and a fashion designer. She used her talents to create “Her Universe“, clothing that specifically targets women and little girls. Star Wars is not the only franchise that her clothing features. It covers many “geek” genres – ex: Marvel, Doctor Who, Wonder Woman. I think Ashley Eckstein is a powerful and fantastic influence to illustrate the fact that Star Wars isn’t just for guys anymore. I love it!

The fact that Star Wars is starting to appeal to the female demographic is awesome! I’ll admit that I love the fact that my 4-year-old daughter likes Star Wars and can even identify characters from the franchise. Hopefully its something she will always like as she gets older. I’ll certainly enjoy it while it lasts but the amazing work Disney and Ashley Eckstein are doing gives me hope that it’s something she will also enjoy well into her 30s (just like her father).