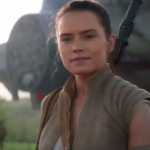 While this movie is the highest grossing movie of all time (domestically), is among the top ranked on Rotten Tomatoes, is considered the third best Star Wars movie, there are still a few folks that like to poke holes in the plot. While I don’t disagree with some of them, there is one I want to talk about specifically. Some folks found it hard to believe that Rey just suddenly knew how to use her powers. I’m going to offer my thoughts on why I think her ability to use her powers is conceivable and how she may be the most powerful Jedi yet.

First off, she doesn’t just suddenly know how to use them, not everything works on the first try. The Jedi Mind Trick, for example, took her a couple tries before she could convince the Stormtrooper to remove her restraints. Her duel with Kylo Ren wasn’t an epic battle, she was barely surviving against his fury; in fact had their fight not been disrupted by an exploding planet, Kylo Ren would probably have defeated her.

Everyone has some innate talent or ability and not everyone recognizes those abilities right away. It might take some accident (perhaps a “happy accident?” – thank you Bob Ross) or being thrown to the proverbial wolves before your natural talent is discovered. Since it’s a natural talent, you might find that certain abilities come more easily to you. Granted those abilities are probably not going to be as refined or sophisticated as someone who has had practice/experience. I’m not talking about some science fiction, superhuman, fantasy based concept; this kind of thing happens in real life, and can happen to everyone. In fact some people have recognized their natural abilities and they have made a living out of it. Perhaps someone has a natural talent for cooking or baking and go on to become a chef. If you want something a little closer to Rey, perhaps some people discover they have a natural talent for martial arts and go on to train others or perform stunt work.

Rey discovering her Jedi abilities is not some cheesy method of advancing the plot quickly. Also, I’m convinced she has the blood of a Skywalker. In fact I believe she is Luke’s daughter (I’ve started calling her Rey Skywalker). So she is the daughter of a powerful Jedi who was the son of another very powerful Jedi; which leads me to my conclusion that Rey may be a Jedi prodigy.