Let’s face it, this movie was doomed from the moment it was announced. It’s poor opening weekend is as lackluster as the fan reaction of the original announcement. Critics are all pathetic so I could care less what they think; and I generally ignore the fare-weather fans. Admittedly, I have been skeptical of this movie since its announcement, but I prefer to keep an open mind.

For what it’s worth, calling it a “flop” seems a little harsh and unfair. How can you expect a movie to succeed when it was mired in doubt and disappointment since its announcement? Obviously people made up their minds before the movie was even released. It’s destiny was determined before it even had a chance. Ranting about fake fans aside, time to discuss what I think of the movie. 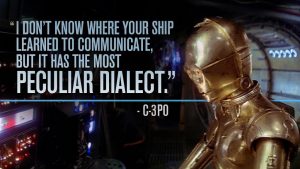 This line from ESB has a much deeper and humorous meaning, now

**Spoiler Alert** Han, Chewie and Lando survive! Haha. I couldn’t resist. The negative expectations for this movie are completely unwarranted. If you have not seen this movie because of a preconceived notion that it’s a flop, then stop listening to the Internet and go anyway. I really enjoyed this movie! Much more than I was expecting. Alden Ehrenreich isn’t as terrible as he was in Beautiful Creatures, he actually does surprisingly well (maybe even better than Hayden Christensen). Donald Glover is a brilliant Lando Calrissian, I am really looking forward to see him in the Lando movie! Honestly, Donald Glover’s performance isn’t surprising, Woody Harrelson, however, is the biggest surprise. I cannot recall too many action rolls for Woody Harrelson but the battle sequence on the tram is really impressive. He makes a better Beckett than he does Haymitch (sorry Hunger Games fans).

There are two things I have to criticize about the movie, which is why I only gave it 4 stars instead of 5. First, I did not find Lady Proxima terribly impressive or intimidating. A large, purple alien worm is not a scary crime lord nor does she fit the Corellia fauna. I’m sure they wanted to use something other than a Hutt as a crime boss, but even a large slug appears more menacing. The second thing, Han actually attempting to speak Wookie the first time he meets Chewbacca. I understand his predicament warrants an alien language, but it didn’t feel like a “Han” thing to do.

And then there is the music.

The Soundtrack Is Amazing

The music is just as important to a movie as the acting, plot and story. If the soundtrack is excellent, 9 times out of 10, so is the movie. The one exception, in my experience, is Ang Lee’s Hulk movie (amazing soundtrack, mediocre movie). Now when you think Star Wars soundtrack, everyone always thinks John Williams. The man IS Star Wars music. You may be surprised to learn that John Williams did not compose this soundtrack. In fact he only composes for the main saga (FYI, Michael Giacchino is the composer for Rogue One).

John Powell is the composer for Solo A Star Wars Story. Powell is mostly known for his work on the How To Train Your Dragon movies and the Jason Bourne movies. I bought, and listened to, the soundtrack a week before I even saw the movie. The music draws you in so quickly it amazes me John Williams isn’t the composer. However, he clearly collaborated with Powell as there is a track that is a montage of some of the original music. In fact, I may be so bold as to say this soundtrack is better than the Rogue One soundtrack and the John Williams montage gives credence to that assertion.

This movie is definitely worth seeing at least once in the theater. Ignore the trolls, the fake fans and the critics and go with an open mind and I think you will find it very entertaining.