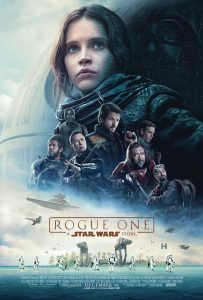 Rogue One: A Star Wars Story

Rogue One takes a different approach to telling a story in the Star Wars universe. It’s a movie that isn’t part of the main story but it does make a significant contribution to the original story that we all first fell in love with.

This is a war movie and honestly, it isn’t a happy movie. In fact it’s probably one of the most depressing movie of all the movies (from a story perspective). I saw this movie the day after Carrie Fisher passed away so the final scene was probably the most heart-wrenching scene in the whole film. If you have seen this movie then you know to what I am comparing it to.

It Changes ‘A New Hope’

I talked about the story this movie was going to tell and I was right on the money. Granted that isn’t saying much because it doesn’t take a lot of imagination to figure out the plot of the movie. Jyn Erso discovers a message that tells her there is a weakness in the Death Star. If the Rebellion could obtain those plans, it would change the outcome of the war (which we all know it does).

Rogue One could literally be Part One of A New Hope. After watching the former you will want to go home and watch the latter immediately. It will change the way you see it.

Many other fans have said they think this movie is how Episode III should have ended. I can see their point but I liked the way III ended and I loved Rogue One. It was not better than The Force Awakens but it does present an interesting thought. Considering the success of the first two Star Wars after George Lucas sold the rights, perhaps Lucas was the problem with the prequels.