So we’re at day … I don’t know, 70-something. Honestly, I’ve stopped counting. In fact, I’ve turned a deaf ear to nearly everything covid related mentioned in the news. I do appreciate that the local news station is now calling the update segment “The Recovery” after so many weeks of “The Coronavirus”. I keep scrolling past anything that appears doom and gloom on social media. There are too many people out there that are suddenly virologists and biology pundits. It’s sickening (pun intended). I hate to break it to you, but …

A MEME IS NOT AN ACCURATE SOURCE OF VIRUS INFORMATION!!!! 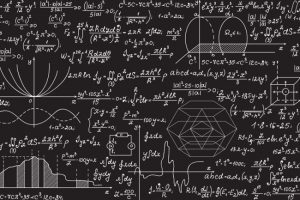 There are memes that I see often stating that less than 0.1% of the population has been infected. This is why you can’t trust memes. I am not a biologist nor a virologist but I do know how to do basic math (and a Google search). As of May 23rd:

Unless every single person is getting tested (which is impossible) then the only number you can use is the approximate confirmed cases. It wouldn’t surprise me if there are asymptomatic people walking around. Statistically speaking, there are probably 100’s of thousands more people with the virus that are not showing signs. My wild ass guess is that we’re probably closer to about 1% of the population with the virus. Thus enters the mask debate.

The Masks We Wear 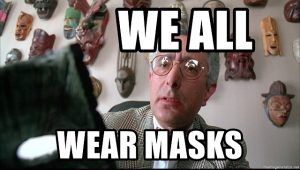 Am I advocating that we should all be wearing masks? Not really. In the spirit of full disclosure, I’ve only worn a mask twice during all of lockdown (as of the date of this post). My reason for not wearing a mask is simply that I didn’t want to. If a place, such as CostCo, requires patrons to wear a mask, then I will wear one in compliance with store policy. When I finally get my hair cut, I’ll wear a mask in compliance with store policy. However, I’ve never worn one when I’ve gone to Kroger. I’ve only worn it once when I’ve gone to Target.

On the other hand, I rarely leave the house without a mask. I carry it with me. If the place looks rather crowded or I know I’ll be going somewhere that requires it, then I have a mask to put on. Mask, or no mask, I will practice proper distancing and try not to touch my face (or sneeze, or cough). I’m not sick nor have I ever felt sick the entire time we’ve been locked down. The same goes for everyone living in my house. I rarely left the house (other than to go jogging) for about 6 weeks of the lockdown so I doubt I was ever near sick people. I have a fairly robust immune system so the biggest threat I pose is that I could be one of those asymptomatic people. Then again, nobody I’ve been around has shown symptoms after the fact.

If I’m an insensitive prick because I don’t wear one 100% of the time, I’m OK with that. I’ll still sleep at night. The opinions of other people mean very little to me (after all opinions are like assholes, everyone has one and they all stink). If only 1% of the population actually has the virus, I’m willing to play the odds. So wear a mask or don’t wear a mask, it doesn’t matter to me. I’m not going to scoff those that wear a mask nor am I going to make a fuss if someplace requires it.

Maybe this rant is just the cabin fever talking.

Be that as it may. One thing I will make abundantly clear. THIS WILL NOT BE THE NEW NORM! All of this is just temporary, preventative measures. A year or two from now we will romanticize how we all survived the “Pandemic of 2020” (while shaking hands and hugging).