I Love the Fel “Star Destroyer”

We are now three patches into the World of Warcraft Legion expansion (patch 7.1, 7.1.5, 7.2). I haven’t seen the subscription numbers lately but they have to be up. I know my play time is increasing quite a bit. In the previous expansions (after Wrath of the Lich King), I rarely felt motivated to log in. As much as I enjoyed Garrisons, it did become too repetitive. In fact WotLK is probably the last expansion I really enjoyed, however this expansion is quickly becoming a very close second.

I am really enjoying Legion! If you read a lot then I highly recommend reading Richard Knaak’s War of the Ancients trilogy. It is a perfect companion for this expansion and I think it has largely influenced how much I am enjoying it. In a lot of ways an MMO is like a movie, it’s only as good as the story it’s telling. Wrath of the Lich King had a great story that really felt entwined with my character and Legion is doing the same thing.

There is more to it than the story in the World of Warcraft Legion expansion. Several of the new features they have added is also contributing to my enjoyment. I will admit that I was skeptical at first of Class Order Halls. I thought it was going to be a step backward from Garrisons. I’ll admit that I was too quick to judge. Blizzard is doing a great job incorporating the Order Halls into the main story of the expansion. Also, I think what makes them fun is the fact that every Order Hall is different and has a different story. The garrisons were all the same no matter which class you were playing; now I’m trying to level all my alts just so I can experience each Order Hall. 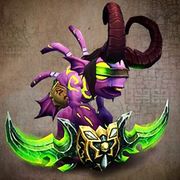 The Artifact Weapons have to be a huge success. They have to be the driving force behind people completing so much additional content. I rarely set foot in Mythic dungeons but now hidden/unlocking appearances have me making the time to do a few. In fact I have probably completed more Mythic dungeons in this expansion than I have since Mythic dungeons were added to the game. The different weapon for each class specialization also has me trying different specializations. For example, I would rarely play anything other than a Fire Mage, but now I’ve acquired the artifact weapon for Fire and Frost (and I’m even considering getting the Arcane weapon).

It Isn’t Just the Content, It’s the People Too

I rarely pay any attention to Trade because of the trolls and 12 year olds causing havoc and raising blood pressures. However, there are good people and when you find those good people it does change the game. I was apart of a great raid team from Karazhan through most of Cataclysm. When Mists of Pandaria released our team broke up and several of us changed servers. Nearly everyone that moved to the same server all found new raid teams but I didn’t. Perhaps that is why I was rarely feeling motivated to log in.

Finally, when Legion came out, I joined a raid team of which couple of my former raid members were already members. It has almost felt like old times again! The people are fun and so diverse. Perhaps some people are intimidated by too much diversity in a raid team, but it becomes just a matter of adjusting to the different personalities. Eventually you learn that those different personalities are what makes things so much more interesting and fun (even when we are pissed off and struggling).

The next raid, Tomb of Sargeras, is about to open and the next patch (7.2.5) will be hitting live servers soon and I am excited! This new team is ready to face this exciting and lore filled content and soon we will destroy Kil’jaeden, just as we destroy Gul’dan.

FOR AZEROTH! FOR VARIAN!!