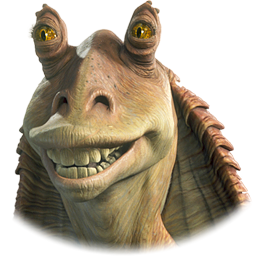 I was also inspired by this polygon article, which is an excellent read and I agree with the author 100%. He does an excellent job defending Jar Jar so there isn’t much else I can say that he hasn’t already mentioned. I do understand why many people dislike Jar Jar, which the author also mentions. I get it, but Jar Jar does deserve some additional support so I am going to justify Jar Jar’s existence from a different perspective.

Let me take you back to the first time you saw Star Wars, whether that was in 77, 80, and 83 or perhaps in the 90s (which is when I saw them for the first time). Try and channel your 7 year old self and remember what it was like seeing Star Wars for the first time. Beyond the space battles and the lightsabers, think about the characters that endeared you. The awkward antics of C-3PO and the cunning of the Ewoks as they use archaic conventions to thwart the Empire. Admit it! These characters are some of the reasons you are now a fan.

Find that inner child and watch the prequels again. I remember watching The Phantom Menace in the theater (which I did seven times) and hearing the laughter of children after one of Jar Jar’s goofy antics. In fact, did you know that Disney’s Goofy was George Lucas’ inspiration for Jar Jar? I can kind of see that now. Also, Lucas’ adopted son, Jett Lucas, named Jar Jar and inspired the Gungan species. What a neat way to include your children into your legacy and life’s work!

So if Jar Jar is based on Goofy, and you hate Jar Jar, then by the inference rule, you hate Goofy! Seriously, how can you hate Goofy?? “Gawrsh!”

All joking aside, I honestly do understand why some folks hate Jar Jar. Perhaps if it weren’t for his voice and maybe even his dialect he may have been more endearing to adults. I ask you this: don’t we want our children to like Star Wars as much as we did when we were young, and give them the same cinematic experience?? Jar Jar is to our children as Wicket was to us. The prequels needed that delightful character that would become one of the reasons our children are now fans.

So I think instead of laughing at depictions of cutting off Jar Jar’s head, maybe its time we cut Jar Jar some slack.