Last week was a rough week. I was sick about half the week and on the day when I was vomiting and running a temperature of 102, we lost Gromit. He had a mild seizure in the kitchen, we rushed him to the vet and they found a weak pulse. They then instructed us to take him to the emergency vet where he went into cardiac arrest upon arrival. They revived him but explained that there is fluid around his heart and he is likely to experience repeated issues. The most humane thing to do, for him, was to let him go. It was really hard for me not to be there. Tuesday, June 5th 2018 is one of the worst days of my life.

Gromit came from a pet store in the UP Mall in South Bend; he was about three months old. However, he was still younger, by about three months, than our other dog Gus. They are also completely different breeds where Gus is about half the size. Despite the difference in genetics, they were brothers at heart. I may even be so bold as to say they were figuratively and literally akin to Lenny and George from Of Mice and Men. While he was trainable, Gromit wasn’t the smartest dog I’ve had (although he was house trained sooner than Gus). However his vapid demeanor was part of his charm. You knew when he was a happy dog, although behind that smile you can tell it was a thoughtless void.

The dog loved to give kisses. If he sets his mind to licking you, he will find any exposed skin to complete his mission. If you found yourself in a vulnerable position (ex: on the bed or the couch) and laughing hysterically, you may soon find him in your face. I was the common victim of Gromit’s tongue bathing. He was maniacal about it; literally pinning me down thus making me laugh harder. The experience was never too awful, aside from the fact that his breath smelled awful! I don’t know if gingivitis is or halitosis was part of the breed but there were other health related issues common to Wheaten’s.

Life with a Soft Coated Wheaten 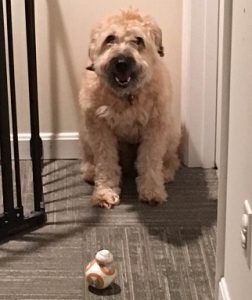 He was afraid of everything, even Sphero BB-8

Gromit was a pure bred Soft-Coated Wheaten Terrier. Unlike Gus, whom we researched before we bought him, Gromit was on a whim. We didn’t know anything about Wheaten’s prior to bringing him home. One thing is certain, he was afraid of everything. My little Sphero BB-8, dish towels, anything that made a noise (so just about every toddler toy we own).

An ailment common to Wheaten’s was a sensitive stomach. It’s highly recommended not to suddenly change their dog food. He did seem to suffer from stomach issues; acid reflux seemed to be a something we dealt with regularly. Unfortunately his solution seemed to be swallow anything he could find lying around on the floor, including our toddler’s socks.

Wheaten’s are hypoallergenic but he had allergies, which may have been something that contributed to his stomach issues. He had a mild allergy to yeast, which is often found in dogs skin. Yes, he was literally allergic to his own skin.

The older he got he did become a bit more aggressive, especially toward other dogs. He was not aggressive toward our other dog until starting about a year ago. Apparently this behavior is common in the breed. We had to be careful if he was around any other dogs; unfortunately he was in his kennel often during visits. Despite his bizarre allergies and his weird temperament when he was older, he was a good dog. We miss him and the house does feel emptier.