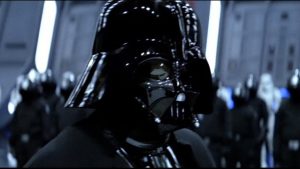 My motivation behind these posts is to shine a light on some of the unsung, underrated and/or under appreciated actors in the Star Wars universe. I feel like, somewhere in the mire of sequel trilogy discontent, so-called fans were whining about voice dubbing. Actually it might be The Mandalorian. While Pedro Pascal is credited as playing the Mandalorian, he isn’t always the man in the costume. It’s really quite hilarious to be critical of voice dubbing in Star Wars. If you’ve seen a picture of James Earl Jones then you know damn well that man did not squeeze his husky ass into that Darth Vader costume. Then it was during my previous post about Denis Lawson that I thought more about voice dubbing. Perhaps, instead of focusing on one individual for this topic, we take a look at a couple of these voice talents.

I’m going to exclude James Earl Jones. If you didn’t know he was the voice of Darth Vader then you don’t really know much about Star Wars. If you don’t know who he is, then go educate yourself. I’d start with Field of Dreams, The Sandlot and Patriot Games. David Prowse was the man in the suit during the original series. I’m also going to exclude Pedro Pascal. While he is somewhat of a new comer to the Star Wars universe, the attention The Mandalorian is getting will make him as big of a house hold name as Mark Hamill and … James Earl Jones 🙂

Lastly, I’m also going to exclude the animated series. While the voice talents of those in The Clones Wars, Rebels and Star Wars Resistance definitely deserve their 15 minutes, that is outside the scope of this post. I want to specifically focus on voice dubbing in live action film.

I figure I might as well start with the one I’ve already mentioned in HMDYK About Denis Lawson. This guy is pretty much a nobody. He had bit roles for 5 years prior to Star Wars. His recurring bit roles continued all through the 80’s. In fact, while looking into his roles I learned that there was an attempt at a Bewitched spin-off series called Tabitha. It only lasted for one season.

David wasn’t completely forgotten about though. In 2016, 40 years after voice dubbing Wedge in Star Wars, he was called back to do it again for Rogue One. He even gets to utter the phrase “May the Force Be With You”.

There were many men to don the Mandalorian armor of Boba Fett but Jeremy Bulloch did it first. However it was Jason Wingreen that gave us his voice in Empire Strikes Back. While I’m sure nobody has heard of this guy but he has quite an extensive career. I almost feel like I should have given him an entire HMDYK post. His first credit, based on IMDB, was in 1955 but his notable roles, to me, were Harry Snowden from All In The Family and Judge Arthur Beaumont in Matlock. Sadly, Jason Wingreen passed away in 2015 at 95 years old.

Pretty much everyone knows that Darth Maul was portrayed by martial artist and Wushu master Ray Park. However, if you’ve ever heard Ray Park speak you know that Maul did not have that distinctive cockney accent. That’s because the voice of Darth Maul was provided by Peter Serafinowicz. Depending on your movie IQ that name may not ring any bells however I’m sure his face does. In fact I probably could have written an entire post for him as well.

You might know him as The Tick or perhaps as the pretentious Denarian Saal in Guardians of the Galaxy. He’s had his own comedy sketch series named after himself and written by his brother James. He’s also popped up in a few other places such as Parks and Recreation, Doctor Who, and the IT Crowd. I’m actually a fairly big fan of his work.

That’s about all I could find. Lucas is pretty big on using voice dubbing to get the right sound. Everyone knows I’m a big advocate and supporter for the prequel trilogy but IF I had to nitpick I’d say Hayden Christensen’s dialog is a little cringe-worthy. However his facial expressions, especially in Revenge of the Sith, are great as Anakin becomes Vader. In typical Lucas fashion, he should have chosen a voice dubbing for Hayden. Perhaps even Matt Lanter; but I digress.