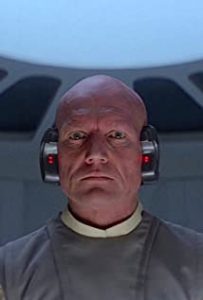 How much do you know about John Hollis? Many of you are probably asking “WHO??!” because he is probably pretty obscure but a cool character from Empire Strikes Back. He is Lando’s cybernetically enhanced aide, Lobot. His birthday was back in November and several Star Wars Facebook groups shined a light on him in celebration of his life. He passed away back in 2005 but Lobot is a cool character so I will happily talk a little bit about John Hollis.

His Life and Career

I’m unable to find a lot of information about his personal life. He was born Bertie Lyn Hollis in London and he was married twice. He is the father of Sarah Hollis Andrews who is a former English child actor and continues her acting career under the name Holly Hamilton.

His acting career spans 71 credits. It seems he’s most known as Lobot in Empire Strikes Back, however he’s been in a couple of other recognizable films and tv series. He was in four of the six episodes of the Doctor Who Mutants story arc. He plays a bald, wheelchair-bound villain in the opening sequence of For Your Eyes Only but he isn’t credited. Apparently there were legal disputes over the rights of Thunderball. His final television appearance was in 1999, six years before his death.

He seems to always play the minor roles; from a German porter in “The Dirty Dozen” to a Krypton elder in Superman I and II. The connotation of a minor role doesn’t exist in Star Wars. In fact I’m inclined to argue there are no minor roles in Star Wars. While nobody pays any attention to John Hollis in any of his other roles, Star Wars fans still acknowledge his spot in the universe. So much so that we honored him on his birthday.