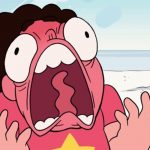 I absolutely cannot abide toxic fans. One of the things that really gets my troll coals burning are people attacking other people because something didn’t play out the way they imagined it. I’ve been on these diatribes before that Star Wars fan toxicity is ruining Star Wars (and it’s definitely not Disney). Personally I feel that unless Disney explicitly snubbed your fan-fiction, your expressed opinions and/or your recommendation letters than you have zero creative control over the plot of the movies. They are not your story to tell. If you disagree, that’s fine. However resorting to toxic social media behavior doesn’t make it right. In fact, it makes you wrong and a disgusting tyrant. Actors and actresses are paid to play a role and a majority of them put a lot of work, and a bit of themselves, into their roles. Attacking a role they played is attacking the person and its asinine.

I Will Always Defend All The Movies

We need to fight against all this Star Wars fan toxicity. Nobody deserves to be lambasted for a role they are paid to play and it’s incredibly naive to think it doesn’t affect them. Daisey Ridley (Rey) and Kelly Marie Tran (Rose Tico) are no longer on social media. Apparently some so-called “fans” disagreed with the Rey and Rose characters so much they tormented both actresses on their respective Twitter or Instagram accounts. Now their accounts are gone; deleted because of the sexist and racist vitriol from alleged “fans”. If that isn’t egregious enough for you then let’s talk about Ahmed Best.

This Has Been Going On For 20 Years

Twenty years ago was the release of the first Star Wars prequel, The Phantom Menace. This is the movie that renewed interest in Star Wars and is the catalyst for the Star Wars Celebration events. This is also the movie that introduced Jar Jar Binks, the most polarizing and scrutinized character in all of Star Wars. Ahmed Best is the actor that lent his voice talents to bring Jar Jar to life. It was an incredible opportunity not just because he has a part in a Star Wars film but to also be apart of state-of-the-art filming techniques.

The utter disrespect the actor and character received from the media and fans is beyond despicable! The man deserved none of the backlash and it was devastating. The best way to understand the pain this man endured is to take 10 minutes and watch this video:

I may put on an unsympathetic facade but this video nearly had me sobbing. He did NOT deserve ANY of that; and I loath the actions of the fans and media! I have always defended all of the Star Wars movies, but this video is my paramount reason that I will defend every movie and every character to my dying breath! God Bless you Ahmed Best!

Love and Compassion at SWC

There is a silver lining to all of this toxic nonsense. The fans that came out to the Star Wars Celebration in Chicago are the truest and most compassionate fans. The fans that Star Wars deserves. I was proud to be among them. During the Phantom Menace 20th Anniversary panel, Ahmed Best came out on stage and the cheers were deafening. They were chanting “Ahmed”! It was amazing! These are the kinds of responses he deserves. The kind that everyone deserves! 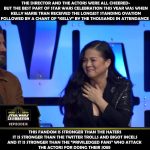 Ahmed is not the only actor that was the victim of fan toxicity to receive chants. During the Episode IX panel, Kelly Marie Tran also received an overwhelming compassionate welcome. The image to the right best explains it; clicking on the image will enlarge it so that you can read the captions. The love and compassion brought her to tears and it was another amazing example of the kind of supportive fandom Star Wars deserves.

So the toxicity seems to be isolated to social media. These lost and misguided fans remain hidden behind their keyboards, only to provoke from the safety of their basements. I will do my part to no longer attempt to antagonize them. I will keep my Twitter, Facebook and (the occasional) Instagram posts lighthearted and positive. I will no longer allow them to provoke me into bitter retaliation. My messages will be of love and compassion for ALL the movies and ALL the characters and ALL the actors!