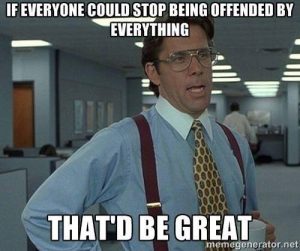 I have taken a break from Facebook. If you notice posts from me they auto-post as part of WordPress plug-ins which automatically sends a tweet for new blog posts. Anytime I submit a tweet to Twitter, it auto-posts to Facebook. While I will also avoid my Twitter feed, I can post to Twitter without actually having to see the latest nonsense. I have also disabled all notifications. Facebook is a harbor of hatred and I just can’t take any more of it right now. Warning: the following might be wrought with disdain and unpleasant suggestions (i.e. nothing will be politically correct).

When Mark Zuckerberg first created Facebook I’m sure his intentions were a means to unite friends across borders. It’s a way to keep in touch with people who have touched your lives in a positive way. Obviously you wouldn’t friend that dirty uncle who molested you at night. Over the past 13 years it has evolved into a harbinger of hatred. Keyboard jockeys share memes and posts to garner support for whatever cause/belief/nonsense they feel is impeding human evolution. However their “activism” ends there; it’s as I’ve said before, trolling. They just want to see how many people they can butt-hurt instead of actually caring about whatever they are bitching about.

Social Media is Not Activism 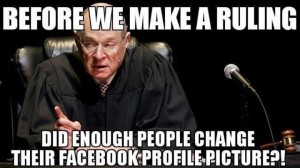 Activism requires more than sharing memes. I assure you no member of Congress, no judge, no presidential aid is going to change their mind because of a Facebook post! Don’t even get me started on those dumbass Facebook profile filters! All you will accomplish by sharing hateful remarks is alienating your friends and family. There are relationships that are being destroyed because people are not afraid to type what they are too afraid to say to someone’s face. Words are permanent whether spoken or written. While you might be able to repair what you say, the Internet never forgets what you wrote. Once its out on the Internet, you can no longer control its existence.

I really don’t think Facebook or Twitter has ever been successful in rallying people for any cause. Everyone posts shit because they know they can hide behind a monitor. I see people posting “I don’t want to start a fight but …”; don’t do that! It’s going to start a fight, regardless because people feel invulnerable when they are sitting at their keyboards or on the couch with their phones.

Nuclear weapons, WMDs, bio-terrorism, Donald Trump, Barrack Obama, none of those will cause the destruction of man. Social Media will be our destruction. The very tool that was created to bring us together will be exactly what tears us apart; it has already begun. So I’m going to avoid Facebook until I no longer feel the need to always check it. I have heard on numerous occasions that people feel happier when they spend time away from Facebook.

One Response to “Soapbox: Facebook is a Harbor of Hatred”