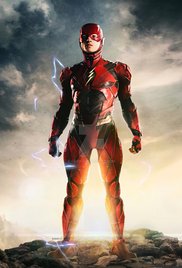 Remember last year when I talked about the great television Marvel is producing? Well I think DC is making a comeback in the form of The Flash. If you haven’t been watching it, then call your doctor because something is wrong with you. Other than Batman and Superman, I don’t know that much about the heroes of DC comics. I was hearing great things about The Flash but I just kept putting it off. After watching the cross-over episode of Supergirl, we finally said “OK, we need to watch this show”. We are in the third season and I have to admit DC is rivaling Marvel with The Flash.

The cast consists of mostly unknowns. Tom Cavanagh and Victor Garber are about the only recognizable faces on the show (except for the Arrow crossover episodes with Steven Amell). The lead role of Barry Allen/The Flash is played by Grant Gustin; whose prior roles were on Glee and 90210 (2013). This is one of those shows where a no-name cast provides remarkable entertainment. The actors really begin to show their range in the second season when they have to portray their doppelgangers. Tom Cavanagh, in particular, gives a superb performance as multiple doppelgangers; and the latest iteration reminds me of his role as J.D.’s brother in Scrubs.

It appears that DC has taken some lessons from Marvel’s success with crossovers. Although DC utilizes its other shows whereas Marvel mixes in its movies with its TV series. Arrow is already a great show in-and-of-itself, but the crossover episodes are fantastic. In large part the success of the crossover episodes is what has lured us in to watch the other series. We actually started watching Supergirl first. The episode where the Flash comes to her Earth lured us in to watch The Flash.

Last year DC launched a new series called “Legends of Tomorrow” which incorporates several characters from both The Flash and Arrow. One of my favorite villains from The Flash, Captain Cold played by Wentworth Miller, is now one of the lead characters on Legends of Tomorrow, thus luring us into that show. Speaking of villains of The Flash, I have two words that also makes the show awesome: Mark Hamill. Yes, Mark Hamill plays a villain called Trickster on The Flash and he is amazing! There needs to be more episodes involving Trickster because I’m blown away every time Mark speaks.

So there you go. If you’ve been watching Agents of S.H.I.E.L.D. and/or any one of the other shows I’ve mentioned above, then you should add all of them to your watch list. The synergy DC is lacking between the TV series and movies, it makes up for in these shows.  If you can’t watch all of them, then definitely put The Flash and Arrow at the top of the list.