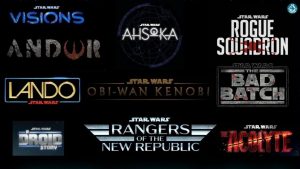 On December 10th Disney held their investor day which is when the Disney Corporation announces it’s major plans and projects. Obviously Disney+ is about to increase its library, dramatically. In case you missed it, TEN Star Wars projects were announced!! I was inundated and overwhelmed with so much exciting information I could barely contain myself.

There are literally hundreds of posts and articles out there discussing these projects. I’m sure you can go read some of the other official posts but I’m writing my bit about it anyway because it’s my blog. I am using the official announcement as my source for these projects. I think most of these are all going to be limited series; probably one season of 10-12 episodes, but I’m cool with that.

The Ones We Already Know About

Obi-Wan Kenobi – We already know about the Obi-Wan Kenobi series. Ewan McGregor will be reprising the role of Kenobi (because nobody else can do it). The series will take place ten years after the events of Revenge of the Sith. It will be directed by Deborah Chow (who directed one of the best episodes of the first season of The Mandalorian). There was a surprise announcement regarding this series. Hayden Christensen will be reprising the role of Darth Vader. Perhaps a rematch … before the rematch? I’m not apposed to his reprisal, he’s an awesome guy, but how will it line up with the actual rematch in A New Hope? I believe filming begins first quarter of 2021 (I’ve heard January and March, not sure which one is true).

Andor – This might be a little less known among folks but it’s been talked about before. There is a Cassian Andor series which takes place prior to Rogue One (obviously). Diego Luna and Alan Tudyk are cast to reprise their respective roles. Toby Haynes is the director who is known for his work on Sherlock and Doctor Who. Apparently production began three weeks ago in London. Here is a link to the Sizzle Reel.

I was surprised that nothing was said about Rebels. For a while rumors were going around that there is going to be a Rebels sequel series but that isn’t part of the upcoming projects. However, I’m not that disappointed. While Rebels is an amazing series, these are equally as exciting.

The Bad Batch – If you didn’t watch the final season of Clone Wars then you may not be as excited about this project. The Bad Batch are a set of experimental clones whose “alterations” weren’t really in line with expectations. The result, however, is a really awesome crew of extraordinary clones. I am excited to see how these guys are doing following the events of the Clone Wars. It looks like it will be the same animation studio as The Clone Wars. I’m not sure if Favreau and Filoni are attached to the project. Here is a link to the Sizzle Reel.

Star Wars: Visions – Three words: Star Wars anime! There have been some great videos around the internet of anime styled Star Wars. As a fan of anime I am really excited. These are going to be and anthology of 10 short films developed by several of the best Japanese anime studios.

A Droid Story – Lucasfilm Animation and legendary studio ILM will be teaming up to develop this animated series. This one is fairly enigmatic. All we know is that its a new hero “guided by R2-D2 and C-3PO”.

The Other Live-Action Series

Ahsoka – When folks were talking about an Ahsoka series I just thought we all were wishful thinking. You can imagine the excitement after learning that Rosario Dawson will continue to bring our beloved Ahsoka to life in her own series!! It will be a limited series but Filoni and Favreau are attached to the project. Now for the bad news. You know that name she dropped in Chapter 13? I suspect now that he won’t be in The Mandalorian but he will be in this series instead.

Lando – Another surprising announcement is a Lando Calrissian “event series”. Justin Simien is attached to the project as the man developing the story. He is best known for his work on Dear White People. There isn’t a lot out there about this series yet however, one thing better be certain. Donald Glover better be reprising his role as Lando. His work in Solo: A Star Wars Story is spot on and amazing!

The Acolyte – This is another enigmatic series that will take place in the final days of the High Republic era. Again, not much is known about this project but many on the Internet are speculating that its about Darth Sidious’ rise to power. Could that mean more Ian McDiarmid? (I’ve heard he is absolutely awesome with the fans at the Celebrations).

Rangers of the New Republic – Again, a project that doesn’t have a lot of detail. We know its live-action. Filoni and Favreau are attached to it and it takes place within the same timeline as The Mandalorian. Someone on Twitter told me that the series will center around Cara Dune. I have not been able to find confirmation but I really hope that is true. Cara Dune is an amazing character and I definitely need more Cara Dune!

Disney already told us that 2023, 2025 and 2027 will be the release years for new Star Wars films. Therefore, among the ten Star Wars projects is the movie scheduled for the December 2023 release. Rogue Squadron will be directed by Patty Jenkins (Wonder Woman 1984) and her video post on her Twitter account not only gave me chills but has me super pumped for the movie!

Though it didn’t quite make the list, Lucasfilm did confirm that Taika Waititi is still working on a “brand-new Star Wars feature”. The choice of words is interesting because it doesn’t say movie. I guess we will still have to wait and see what that’s about.

Regardless it seems I am going to be busy writing a lot of Star Wars posts next year. Perhaps I need to change the tagline of my blog from “gamer geek” to “Star Wars geek” because I’m seeing a shift in theme.