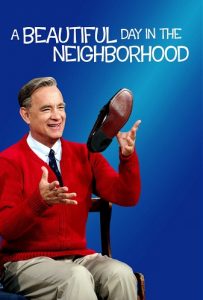 A Beautiful Day in the Neighborhood

I know this movie isn’t exactly a recent release; last November in fact. However a movie about someone as iconic as Mr Rogers cannot go without commenting. The man defined an entire generation; my generation. The trailer for this film had me choked up with nostalgia and Tom Hanks seemed like the perfect cast.

And he was! However, this movie isn’t actually about Fred Rogers, its about the man writing a profile on Mr. Rogers; Lloyd Vogel. This movie is a true story.

It’s Not About Fred

As I mentioned, this movie isn’t actually about Mr. Rogers. Lloyd Vogel is the character name that represents the actual writer, Tom Junod. Lloyd has a reputation for writing rather scathing exposes for Esquire magazine. He also has a very hostile relationship with is father (for reasons that are explained in the movie). When he is given an assignment to write a profile on Mr. Rogers, his perspective is completely changed. It’s all thanks to Mr. Rogers.

This movie is so amazing and very respectful to Mr. Rogers. It reinforces that Mr. Rogers is the same person on and off the screen. Every time there is a location change, a scaled down model of the location is used (just like they did in Mr. Rogers Neighborhood). That is easily one of the best features of the film. After reading some of the trivia about this film (which I often do for lots of movies) one of the interesting facts I read is that the studio spent a lot of time (and money) getting the film as accurate as possible.

The writers said the film took so long to be made because they worked with the estate tirelessly to ensure the accuracy of the film. They were given access to the archives to ensure it was “right”. – IMDB

“Such a Good Feeling”

I especially like the scene where Mr. Rogers is on the subway and the whole subway car sings “A Beautiful Day in the Neighborhood”; I would have joined in the chorus had I been there too. This movie will leave you with “such a good feeling” by the end. By the way, if you have Amazon Prime, you can watch old episodes of Mr. Rogers Neighborhood; my daughter has already watched a few. If you grew up with this man in your living room, you need to see this film!