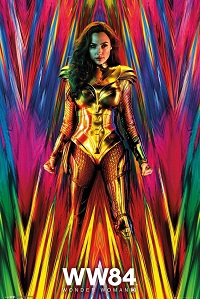 While this is my first movie review of 2021, I did not see this movie in 2021. In fact we watched this film on New Years Eve, so technically I saw this movie last year. However since it was a movie we watched in the evening, I did not have time to write up a review before 2020 ended. I think we were all ready for 2020 to be over.

The year is 1984 (obviously, by the title) and Diana is still going about her day covertly rescuing people and stopping crime. Although it’s been 40 years, she still laments the death of Steve Trevor and seems to accept the fact that she will always be alone. She befriends Barbara Minerva, a socially awkward archeologist and anthropologist who finds a particularly powerful artifact. An artifact that grants wishes, but at a terrible cost. Now she must stop The Cheetah and Max Lord from abusing the power of this “dream stone”.

I am really surprised to find so many low and harsh reviews of this movie. I’ll admit it isn’t as good as the first movie but I, honestly, didn’t think it was terrible. There isn’t as much action but Chris Pine provides sufficient comic relief. I really enjoyed Pedro Pascal’s (aka The Mandalorian) performance as Max Lord. Actually, if I’m being honest, Kristin Wiig is an excellent villain. I’m used to seeing her in more comedic roles (ex: Bridesmaids) so when she becomes full on Cheetah, she looks pretty damn badass.

My harshest criticism would probably be the end. The tactic Wonder Woman uses to “defeat” Max Lord is a little corny. Granted Wonder Woman’s whole philosophy is built on the power of truth (hence the “Lasso of Truth”) so it fits the character. Unfortunately human kind is not so willing to embrace truth so its difficult to believe that she can easily convince the world to “renounce their wishes”. I’m also not really sold on the way in which Max Lord “touches” millions of people via a satellite broadcast. I feel like that whole scenario wasn’t entirely thought out.

Initially I wanted to give this movie 3.5 stars but the addon only supports whole numbers. Since I would consider watching this movie again I decided to go ahead and bump it up to 4 stars. I think Patty Jenkins did the best she could with the script she was given. I’m excited to see what she does for the Rogue Squadron movie; hopefully she will have better screenplay writers.

What did you think of Wonder Woman 1984?

The people who are crazy enough to think they can change the world, are the ones who do.