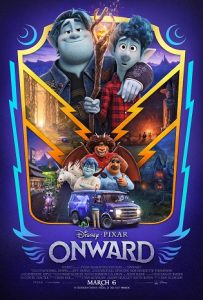 A side effect of these extraordinary times is the early digital release of new movies. The latest Disney film became available on Disney+ after only a month in theaters. While nothing will compare to the theater experience, it’s nice to be able to see new movies during quarantine. Keep in mind, not all movies will be free with a subscription to a streaming service. Another obvious perk to Disney+. Here is my movie review of Onward.

Spiderman (Tom Holland) and Starlord (Chris Pratt) team up for this typical Disney “feel good” film. Ian (Holland) and Barley (Pratt) Lightfoot are eleven brothers who lost their father to illness. Upon Ian’s 16th birthday their late father prepared an extraordinary gift. He was a wizard before the world forgot about magic, and he has a spell that can bring him back for one day. Now the brothers must embark on an amazing journey to complete the spell that will “complete” their father’s gift.

Onward is not just about the family bond, but sibling bond. As I already said, this is your typical heartwarming animated film, but it’s quite enjoyable. The most entertaining element about this film is visualizing Chris Pratt performing his lines while recording them. In fact I even went out to see if there are any YouTube videos of Chris and Tom in the recording booth (FYI, there are). At any rate, as a gamer of, primarily fantasy video games, I can easily identify with Barley. However, there is more about this film that kind of hit home.

Barley is the older but nerdy sibling; while Ian is more down to earth, but not really a popular kid in school. While Barley is comfortable embracing his nerdy personality, Ian struggles to be accepted and often feels embarrassed by his brother. I have a younger sister who may have struggled with an older brother that loved Star Wars, reading books, collecting comic books, playing video games and embracing the geek life.

So watching Ian and Barley discover that special sibling bond felt very real to me. It will pull on those heart strings. This movie is definitely worth watching, especially if you have siblings.

I Still Respect the Trek