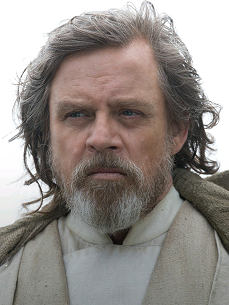 Disney made the official announcement Monday, January 23rd, freaking out Star Wars geeks the world over. Star Wars: The Last Jedi will likely be about Luke Skywalker and where he has been since Ben Solo failed his training. Director Rian Johnson alluded to that in a recent interview. So it stands to reason that the title, while trite, sets the tone for Episode 8. I’m sure there are thousands of “so-called” fans rolling their eyes and crying that the title sucks (obviously Rian Johnson and Disney neglected to check with them first before making the title official). However I think the title is actually rather fitting.

Before you completely dismiss the title as hackneyed consider the following points. In the interview Rian Johnson explains that Episode 8 will answer the question “What’s going on with Luke Skywalker?” Why does he feel responsible for Ben turning to the dark side and now lives on an island like Oliver Queen? Also, in The Force Awakens they often reference Luke as “the last Jedi” so we knew back in December 2015. I mean, it seems fairly obvious to me!

The Plural Form of Jedi Is …

Then I was talking to my brother-in-law and he asked me a question that completely changes how to interpret the title. The plural form of Jedi is “Jedi” (just as the plural form of moose is “moose”). Talk about having my mind blown. Of course it’s possible the title has deeper meanings. George Lucas was never known for having deep, arcane names for his movies. I like a title that is subject to interpretation and the movie doesn’t clearly explain it either (ex: The Force Awakens). So “the last Jedi” could mean Luke and Rey because they are the last ones.

The title also has a connotation that it should be the name of the last movie in a series (i.e. Episode 9). While that certainly seems valid, the fact that it’s the title of the middle movie leaves me to believe that it’s about the present state of the Jedi and not foretelling the future.

Of course the thought on everyone’s mind now is when do we get the first teaser trailer??!? Perhaps during the Super Bowl (which is when we got the first trailer for The Force Awakens)?