At first I wasn’t going to write about this. Then I began waffling about it. Now I can’t seem to help myself because “OMG It was so good!”. Will I do this for the remaining 7 episodes? I don’t know. It depends on how inspired I am. Leave a comment if you would like to chime in. Regardless, I can’t help it, I need to talk about Chapter 9: The Marshal. If you have not seen the new episode, I advise you to stop right now.

The following content contains spoilers for The Mandalorian S2 E1.

There are a couple of guest stars in this episode. I should say “new” guest stars as Amy Sedaris reprises her role as Peli Motto. The other guest stars is John Leguizamo (albeit rather brief) and Timothy Olyphant as Cobb Vanth (aka “The Marshal”). I don’t always spend a lot of time reading fan reactions to anything regarding the Star Wars universe because fans love to whine when things don’t coincide with their narrative. Be that as it may one of the interesting comparisons is Timothy Olyphant’s character. There is a series called “Justified” which also stars Timothy Olyphant as a U.S. Marshal. I’ve never actually seen, or heard of it. Fans were drawing parallels between the two characters. Perhaps an intentional easter egg?

Do I Detect Some Easter Eggs?

Actually, Cobb Vanth is kind of an easter egg if you’ve read Aftermath. It’s really cool to see him brought to life. While we are talking about Timothy Olyphant’s character, does the engine of his speeder look familiar? Perhaps Anakin’s podracer engine, with a different paint job? Also, I feel like I saw a depiction of (it’s not Maz) a protocol droid (perhaps C-3PO?) in the graffiti as Mando is making his way to Gor Koresh (John Leguizamo’s character).

I want to backtrack to Peli Motto real quick. The droid that she asks to pull up a map of Tattooine, doesn’t he seem familiar? Maybe you remember him as having a “bad motivator“. 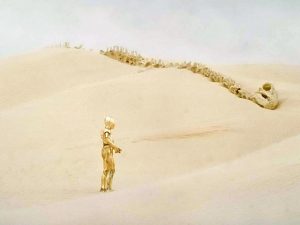 Of course one obvious easter egg is the Krayt dragon. The Krayt dragon essentially gives homage to Star Wars A New Hope, the skeleton we see behind C-3PO is that of a smaller Krayt dragon, perhaps a juvenile or child.

I’m not going to mention the armor Cobb is wearing because that’s part of the episode’s story and not really an easter egg. However, I love the depiction when we first see him in it. It’s almost as if he’s a fan that found the armor and put it on, even though it doesn’t fit. I think all of us suddenly channeled our inner 10 year old.

Finally, we learn the fate of the sarlacc from Return of the Jedi. The fearsome creature that is Jabba’s favorite form of torture and execution. We learn that the Krayt dragon ate the sarlacc which, perhaps, alludes to how you-know-who escaped (aka the figure we see at the end).

Leave a comment if you noticed anything or have any thoughts what I saw.