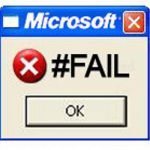 I’m going a completely different direction for the August Top Five. Technology. It’s pretty well known among my peers that I am Microsoft’s biggest critic. While I do make a living using their technology that doesn’t mean I drank the proverbial kool-aid. Granted even Apple and Google have had their technical slip-ups but their list isn’t quite as embarrassing as Microsoft’s. The lesson Microsoft seems to fail to learn is that just because someone else is already doing it doesn’t mean they can do it better. X-Box is about the ONLY success story. I digress. Here are my top 5 epic Microsoft fails.

The honorable mentions may be fairly obvious; Bing and Internet Explorer/Edge. IE has been a thorn in developers side for decades. Writing code to meet its sloppy standards has made it hated by many in the tech industry. Microsoft should have gotten out of the browser business decades ago. Bing is the Microsoft search engine to compete with Google. So few people were using Bing that Microsoft is actually trying to PAY people to use it with Microsoft Rewards. In fact you even get bonus rewards for using Edge. They are even paying you to use Edge!!! PATHETIC FAIL!

It’s true. All of it. The Dark Side. The Jedi. They’re real.