Since the trailer for ‘The Last Jedi’ premiered everyone is losing their minds over Luke’s ominous words “… it’s time for the Jedi to end“. Between those words and the title of the movie, I can see how people are drawing that conclusion. Are the Jedi really ending? Has Luke gone to the Dark Side? Maybe Luke has lost his damn mind??! This is what is so much fun about watching the trailer; we will spend the next 240 days coming up with hypothesis after hypothesis. I am going to dive into some of the popular ones which intertwine with some of my theories. If you are reading this then I am going to assume you have seen The Force Awakens. I will mention some of the big spoilers of the movie to help augment my theories.

Theory 1: The Jedi Really Are Ending

Let’s consider the fact that Luke means exactly what he says. The Jedi are ending. No interpolation. No hidden meaning. Honestly this makes sense to me. The Sith have been destroyed. The Empire has been dismantled. What place do the Jedi have in the galaxy now? In 30 years the galaxy hasn’t really needed the Jedi. The Jedi are essentially like the French musketeers of the 1600s who were a private cavalry for the King. They were ineffective against Napoleon and ultimately disbanded. Without a purpose the Jedi have no reason to exist. Perhaps Luke knows this and, while also lamenting Ben Solo’s turn to the Dark Side, feels the Jedi Order is over.

What is the point of training new Jedi if they have no purpose? The New Republic fighters and military leaders prove they are quite capable of defending themselves against the First Order; despite the devastating loss of the Hosnian system. Clearly Luke feels he is not capable of effectively training new Jedi which, in his mind, don’t really serve a purpose anymore.

Theory 2: Luke Thinks He has Failed as a Jedi

After having failed to properly train Ben Solo, now Kylo Ren, he feels he has failed the Jedi Order, Leia and Han, and himself. He’s saying it’s time for the Jedi to end because he’s not going to train more and there is nobody else to carry that mantle. Everyone keeps focusing on the end of the quote but the full quote from the trailer is “I only know one truth; it’s time for the Jedi to end“. We don’t know the context in which he says that line. I imagine it’s something that occurs in a conversation not long after Rey’s arrival. I envision the interaction going something like this:

Rey: “The Resistance needs you. They need to know the truth.”
Luke: “I only know one truth; it’s time for the Jedi to end“

Perhaps Rey has already told Luke that Han is dead, killed by Kylo Ren. Luke feels responsible for his friend’s death because of Ben’s turn to the Dark Side and his obsession with Darth Vader. Perhaps if he hadn’t been so focused on rebuilding the Jedi, he could have prevented Han’s death and the rise of the First Order. However, something or someone, perhaps even Rey, convinces Luke that the Jedi should not end and the New Republic needs their protection once again.

If I were the director this is exactly what I would do. You use a line like “it’s time for the Jedi to end” in the trailer to tease your audience. I would want them all asking the question “are the Jedi really ending”? J.J. Abrams set this up perfectly; since Luke didn’t have any dialog we have no idea what his demeanor is. It creates the perfect enigmatic scenario. 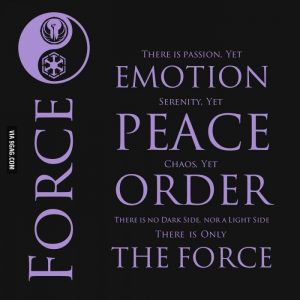 This is one of the most popular theories, and my favorite. It’s also probably the quintessential riddle, wrapped in a mystery, inside an enigma. This is a theory that dates back to Return of the Jedi. If Luke actually is the one that will bring balance to the Force, a Gray Jedi is how that prophecy will be fulfilled. You cannot have order without chaos, therefore you cannot have balance without the Dark Side and the Light Side. A Gray Jedi can walk the line between both. Mace Windu is widely believed to also be a Gray Jedi as he has training in both the Dark Side and the Light Side of the Force. A Gray Jedi believes that there isn’t a Dark Side or a Light Side, there is just “the Force”.

So when Luke says “it’s time for the Jedi to end“, perhaps he means the traditional Jedi. Perhaps he’s referring to the dawn of the Gray Jedi where peace can only be maintained by embracing both sides of the Force (i.e. “it’s so much bigger”). Maybe it is the fate of the Skywalkers to become the Gray Jedi and it is time for younger blood to build a new Jedi Order. Remember these nine movies are considered the “Skywalker Saga” so the fate of Luke does not necessarily dictate the fate of the Jedi.