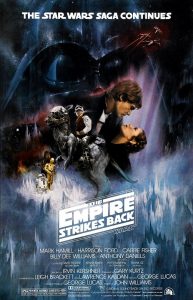 It does have one of the biggest bombshells in cinematic history (at the time) when it’s revealed Darth Vader is Luke’s father. I always like to point out that the most quoted line from Star Wars is actually misquoted. Vader never actually says “Luke, I am your father”; he says “No! I am your father!”. To be fair it’s also my favorite movie for reasons I can’t fully explain. It is the movie when the Imperial March is introduced, probably the most iconic track in all of cinema.

It Parallel’s The Last Jedi

I’m going to catch a lot of flak for that statement. The Last Jedi caught a lot of undeserving negative press. Be that as it may, during my 11-film re-watch I noticed some similarities. In each the to-be Jedi are trained by an old, cantankerous, disillusioned or eccentric Jedi Master. Including sage Yoda advice we can all use in our everyday lives (“The greatest teacher, failure is”). There is also the shocking parentage revelations. Granted Rey’s perceived lineage isn’t as surprising as Luke’s (although the Rise of Skywalker makes up for that).

In both movies the good guys don’t really win, in fact the bad guys dominate the narrative of the whole movie; and in the end the good guys barely escape. The bad guy still bargains with the good guy to join forces to “rule the galaxy”. I think the biggest coincidence is that the “bland” review The Last Jedi received is the same review the New York Times gave The Empire Strikes Back back in 1980. In a few years it will be everyone’s favorite too.

So if you’re not watching all the movies this month, at least pop in Empire Strikes Back for its 40th anniversary.