Now that I have had some time to digest this new trailer (and watch it about 8 more times), I’ve come up with a few thoughts. Some conclusions I’ve made based on what I’ve gleaned from the trailer; others are based on some of the other things I’ve read on the Internet. Everyone is posting their theories and trailer break downs, but this is my Rise of Skywalker trailer reaction.

If you haven’t watched the new trailer yet, or again (and again), then go do that now (or again).

I think this trailer is much different than the other two; it’s far more nebulous. There were major plot points I extrapolated, correctly, based on each trailer. In The Force Awakens, it was Kylo Ren’s heritage. In The Last Jedi it was the reason for Luke’s cantankerous behavior and hermit lifestyle. This trailer, however, leaves very few clues. Although, the fact that Kylo Ren was the crux for both of those major plot points makes me wonder what will be his final role?

Is That The Mortis Dagger?? 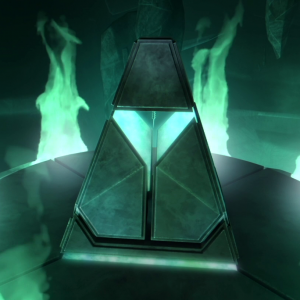 At about 1:50 into the trailer we see Rey and Kylo Ren destroy a statue. The scene doesn’t really indicate if they are working together or if that statue is collateral damage. Regardless, what’s important is what Rey is holding in her left hand? It appears to be a dagger which begs the question, is that the Mortis Dagger??

If you watch The Clone Wars then think back to Season 3, episodes 15, 16 and 17. Anakin, Obi-Wan and Ahsoka leave for a mission and suddenly find themselves on the planet Mortis. On this planet lives The Father, the Daughter and the Son. All three seem to be incarnations of the Force and all three are immortal. The Son, which is the incarnation of the Dark Side, has become too consumed with his power. The Father helps Obi-Wan and Ahsoka acquire the Mortis Dagger which removes immortality and can therefore be used to defeat The Son.

I’m going to stop there 1) because you should go watch those episodes, if you haven’t yet and 2) I think you know where I’m going with this. Episode IX director, J. J. Abrams, has said that the Rise of Skywalker will “unite all three trilogies”. Granted, The Clone Wars is not a movie but an animated series, however it is part of the Skywalker Saga. Using the Mortis Dagger to destroy the Emperor not only makes sense but would be another one of those brilliant tie-ins. I’m really digging this idea and I really hope the Internet and I are correct.

There is not a lot to glean from this trailer, other than the possible modus operandi of permanently killing Palpatine. Therefore I’m going to move on to other reactions and thoughts I had about this final trailer. 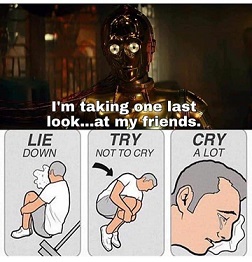 This meme nearly perfectly embodies the emotion I feel every single time I watch the trailer. At the Star Wars Celebration Anthony Daniels speaks about filming his final scene of the Skywalker saga. He said that he was saying “goodbye” in the scene but it was more than C-3PO saying good bye to the the other characters. He was saying good bye to his fellow cast members and the audience. The hidden meaning behind that line makes this scene more heart wrenching.

Speaking of that moment in the trailer, what possible reason would there be to wipe C-3PO … again? I suspect it has something to do with the dagger and probably some kind of ancient markings or language. A language only a protocol droid could understand, but perhaps there is a cost. A cost 3PO will have to pay.

If you’re not balling like a jaded school kid after that scene, then the last spoken word will put you over the edge. The trailer ends with the most iconic phrase of the series spoken, first, by Luke Skywalker – “The Force will be with you ..”. The last word of that phrase is “Always”, and its spoken by Leia. It’s only fitting that the final trailer of the Skywalker saga is spoken by the late, great, Carrie Fisher. It’s a stroke of marketing brilliance. Well done, J.J. Well done.

If I had to make a list of the top five things I like most about Star Wars, probably number one on the list would be the music. John Williams is a musical genius. I am so glad he came out of retirement (at 86 years old!!!) to compose the final movie in the Skywalker Saga. There is no man more qualified to finish this amazing journey! Don’t get me wrong I think the work Michael Giacchino and John Powell did on Rogue One and Solo (respectively) is amazing. However, the right way to end this saga is with John Williams.

That being said, just listening to the excerpts of the score from the trailer has me believing that this will be his Magnum Opus. John Williams has composed scores for hundreds of movies and I’m not discounting those works. Everything he has done is truly amazing work. However, this movie is the culmination of over 40 years of Star Wars. There is no other saga in the history of film that has endured over four decades with music composed by the same man.

I am equally as excited about buying the soundtrack as I am about seeing the movie.

Allow me a cliché closing statement: Star Wars – Episode IX: The Rise of Skywalker will be in theaters December 20th!