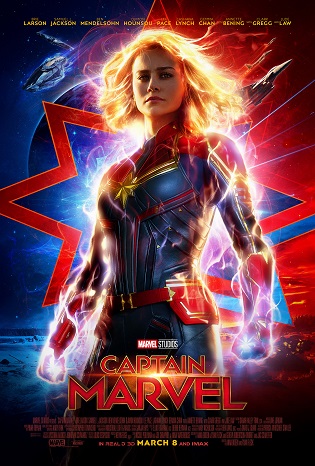 A Kree by the name of Vers (Brie Larson) crashes on Earth, circa 1995. She is hunting Skrull who are seeking technology the Kree do not want them to have. Assisting her on her mission is SHIELD agent Nick Fury. During her search she also has flashbacks that seem to be from a previous life. Are these flashbacks key to defeating the Skrull and/or helping her find out who she really is?

I really enjoyed this movie. I can’t say if it’s the witty writing or the homage to the 90’s that I found truly entertaining. The flashbacks to Blockbuster Video and Alta Vista were especially memorable. This movie ties into all the other films so nicely (and not just the specific Avengers movies). It is also entertaining to see a young Nick Fury and a young, newly recruited, Phil Coulson in action. I hope Clark Gregg is comfortable with being typecast because he’s going to be Phil Coulson for the rest of his days.

In fact one of the fun things to do during this film is to spot the easter eggs, especially if you are a child of the 90s. However, it isn’t just the 1990 cultural references. There are also little bits of minutiae from Marvel’s Agents of S.H.I.E.L.D. as well as the other MCU movies.

The SHIELD Inconsistency and Stan Lee

Perhaps the one issue I found to be inconsistent in the film is the use of the S.H.I.E.L.D. acronym. The events of this movie takes place in 1995, which is 13 years prior to Iron Man. When Coulson introduces himself in Iron Man he always recites the entire name of SHIELD. There are even jokes about “working on the name”. However throughout the entire Captain Marvel movie they always call themselves SHIELD. So either Coulson is being a smart ass in Iron Man or its a missed inconsistency. If anyone knows of another explanation which I have not yet found, please comment.

If you haven’t heard by now, Captain Marvel is the first Marvel movie to be released after Stan Lee’s death. Which means his cameo in this film is also the last cameo he will ever do (and its an excellent cameo, especially if you’ve seen Mallrats). To honor Stan Lee and his work, the Marvel Studios sequence at the beginning of the movie has been changed to be all of Stan Lee’s cameos. What a truly fantastic homage and I hope that is a permanent change (including the “Thank You Stan” at the end).

I am, by no means, a feminist. However, despite my presumed political leanings, I do support gender equality. Therefore I think this movie makes huge strides in support of gender equality. It is the first solo-female lead in the MCU universe. It is written exclusively by women. The soundtrack, which is very good, is composed by Pinar Toprak who is the first female to compose an MCU movie. In fact I really wanted my daughter to see this movie because its exclusively about a female super hero. The best part is, the movie never tries to make that point. There are no subtle undertones or subliminal messages and nothing is constantly shoved in your face. All of the female empowerment associated with this film is tucked away in the trivia. /end slightly political editorial.

Final comment: this is an excellent addition to the MCU collection of movies, definitely worth seeing in the theater, despite the lurking “super hero burn out”.