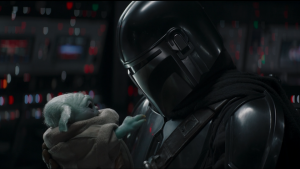 My hands are still shaking as I’m typing this. I don’t know how this show keeps getting better week after week. Season 2 is probably the best season thus far!! He recruits the right people to help him rescue Grogu, Death Watch! Cara Dune is such a bad ass and Boba Fett should know better than to pick a fight with Sasha Banks. I love the all female incursion party consisting of Cara Dune, Fennec, Bo Katan and Koska. These chicks could tear up the galaxy! Then there is the fight between Din and the Darksaber wielding Moff Gideon. I love the sound effects used when the Darksaber is wielded; such an incredible fight. I may not have taken a breath during the entire duel.

By the way, the legend about how the Darksaber changes hands is true. If you want to see the history of it, you need to go back and watch The Clone Wars and Rebels. It’s an interesting plot twist; has Moff Gideon successfully sowed the seeds of descent between Din and Bo Katan? Just when the episode couldn’t get any cooler, that X-Wing shows up …

Initially I thought Captain Teva and Trapper Wolf were there to assist but then Bo-Katan mentions that it’s just one X-Wing. At that moment I knew what was coming. When that green lightsaber ignites, the chills consume your whole body. The way he cuts through those Dark Troopers so closely parallels that scene at the end of Rogue One it’s uncanny; “like father like son”.

Remember, this series takes place just 5 years after Return of the Jedi so it makes sense that Luke is the one that answers the call. I know Ezra is still out there somewhere but Luke is the right person to respond. Deep down, we all really wanted it to be Luke Skywalker anyway. After all he is currently trying to rebuild the Jedi and will soon establish his academy (that Ben Solo ultimately destroys).

Then there is that moment where Grogu and Din have to say goodbye. I have seen Titanic, Steel Magnolia’s, My Girl and I am stoic; but leave it to Jon Favreau to get me choked up watching Star Wars. Honestly, I think I was fine until R2 rolled in and instantly befriended Grogu. I don’t know what it was about R2 that did it for me.

So Season 2 is over and we have to wait a year before we get new episodes again. What will Season 3 bring us? Does this mean “Baby Yoda”, aka Grogu, will no longer be part of the show? It’s hard to imagine this show without him but the show isn’t about Grogu.

Moff Gideon is still alive, which is a good call. He is just too good of a villain to kill off so soon. In fact, I suspect he will be the main antagonist for all four seasons. There is also that little matter over the dispute of who gets the Darksaber. Bo-Katan is the rightful heir to it and the throne. Again, if you want to know why go watch The Clone Wars and Rebels.

I don’t think this is the end for Grogu and Din but I think they are going to be apart for a while; we probably won’t see him at all in Season 3. However, I think he is still a major part of the overall story arc, which will ultimately lead to the events in the sequel trilogy. If the other series that take place within the same timeline will come together for one, big galactic battle, I think that story it will begin in season 3.

What did you think?