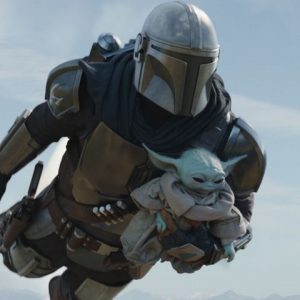 Seven minutes into this episode and I was losing my mind. OMG, the Slave I!! Thirteen minutes in and the action starts. Three minutes after that and every Star Wars nerd knows what’s going to happen. Temuera Morrison is back as Boba Fett and he’s amazing! This is not the Boba Fett we saw in the original trilogy. I love this version of Boba Fett; he is now twice the bad ass. Ming-Na Wen is back as well, reprising her role of Fennec Shand; and we get to see her amazing skills as well. The action is fantastic and well done!

Cara Dune is back, albeit briefly; and she’s been promoted. It appears she accepted Captain Teva’s offer to join the New Republic. It is teased that we will see Bill Burr’s return, which is exciting because Mayfield is an awesome character. We also see Moff Gideon again and the Darksaber. Moff Gideon is such an amazing bad guy reinforcing that Giancarlo Esposito is the perfect cast.

The Tragedy and Finale Build Up

In my last post I surmised the season would end on Tython. I was wrong but this ending was still unexpected and gut wrenching. Grogu is captured, which isn’t surprising, time to get ready for the season finale in two weeks. However, the real tragedy is the destruction of the Razer Crest; it felt like watching the Millennium Falcon blowing up. However, it leaves me wondering about the ship we see in The Rise of Skywalker. My guess is that he eventually gets a rebuilt Razer Crest before the series ends; perhaps a gift for all the people he’s helped. Until then he probably gets to bum around in the Slave I, at least for the remainder of the season.

A couple of easter egg moments. Aside from the obvious Boba Fett and the Slave I, the trooper transport ships seem vaguely familiar. I;’m inclined to suggest they slightly resemble the First Order transport ships; specifically the ones we see on Pasaana in The Rise of Skywalker. That’s all for now.

What did you spot?