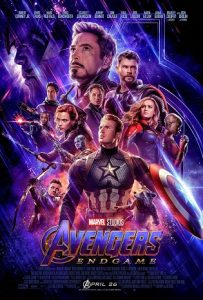 Despite the looming “Superhero Burnout“, this movie is crushing it at the box office. It is already breaking the same records The Force Awakens broke four years ago. I fully expect this film to continue to break records set by Star Wars, including top grossing movie of all time in the domestic box office. Honestly, I’m glad it’s a Marvel movie too.

In the spirit of the #DontSpoilTheEndgame trend, this is a SPOILER FREE movie review, however if you have not seen Infinity War yet, then consider this your **spoiler alert**!! It is impossible to talk about this movie without talking about the events of the previous film.

Half of the living things in the universe, including half the Avengers, are gone; wiped out with a single snap. Thanos has vanished to bask in the balance he has created. Meanwhile the remaining Avengers are trying to piece the world back together and move on. However “moving on” will not be something they are willing to do, especially when Scott Lang shows up with an idea.

This is a pretty amazing movie, though I do have one particular complaint, which I will get to shortly. This movie has quite a few epic moments, one of which I know many fans have been waiting for since Age of Ultron. I will not say what that is so as to remain spoiler free but I think you will know it when you see it, and deem it “worthy”. This movie is quite the finale for the Avengers Initiative. One of my favorite parts happens during and end credit montage. This is not a spoiler. The signatures of Chris Evans, Robert Downey Jr, Chris Hemsworth, Scarlett Johansson, Mark Ruffalo and Jeremy Renner are shown as if to signify the signing of their magnum opus. This is such a fitting tribute.

Is This The Best Movie I’ve Seen?

No, not by a long shot. In all fairness I almost gave this movie 4 stars. There is a particular plot mechanic that is rarely done well and Bruce Banner’s rationale is pretty insufficient, in my opinion. There is also a “passing of the torch” moment which does not particularly coincide with canon (at least from what I’ve read); however, it is still pretty cool. Be that as it may, the way in which they wrap up the story’s of a few of the character’s is brilliant and well done … and emotional. After the movie ended, my first instinct was not to see it again; at least not right away. The main reason being the 3 hour run time. Actually I feel more inclined to watch all the other movies again!

This movie is a magnum opus and truly a fitting end of the past 11 years and 21 movies. The feeling I had leaving this movie will probably be much the same feeling I will have leaving The Rise of Skywalker. A sense of emotional finality; these are characters that not just defined our lives, but a generation. Watching these events come to an end feels akin to a graduation or major life milestone. The events and the people of the years prior make up the journey we all had to take. Sometimes the end is hard because we endured so much to get here, but we grew along the way. We form bonds and relationships with people, real or fictional. It’s the journey that’s worth celebrating at the end but it’s also what makes it difficult. After all, part of the journey is the end.