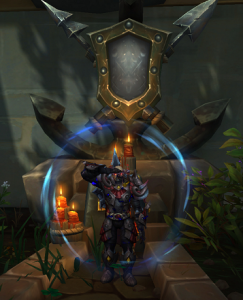 As I alluded to a few weeks ago, for the first time in 15 years I let my World of Warcraft account lapse. It was strange seeing the warning on the launcher that counted down the days until expiration. There was a small part of me secretly hoping Blizzard would release some kind of patch that would entice a stay of execution. Alas, that did not happen and there’s not a chance in hell I’m playing Classic. So as my WoW hiatus begins where did I leave things and what do I hope to get done when the Shadowlands pre-patch finally drops? I’m assuming there will be something to do during the pre-patch, however the contents of it is as elusive as the release date.

I’m going to assume that whatever content is available in the patch, it won’t consume all my time. Therefore I plan to resume my mount farming and grinding out any rep that is left (if any). I’ll likely resume doing the invasions and emissary quests. Those paragon chests can have some really nice gold rewards. I’ve decided that I’m going to give up on the AH mount (Caravan Brutosaur). I’ll take my chances with the Black Market Auction House in Shadowlands. Besides my main is an Engineer and often has access to an Auction House in places where other players don’t.

I’ll wrap up any remaining profession tasks; by that I mean max any remaining professions and/or complete any Tricks of the Trade quests. The former being the higher priority. I’m not going to level any additional alts. I do have a couple that I’ve started, including a Mechagnome hunter but it’s rather pointless to grind out 120 levels when you only need to get to 60 after the expansion drops. I should also try to grind out some Island Expeditions; I regret not doing more of them (especially for the mounts).

It’s going to feel really strange when I can’t log into WoW, albeit brief. I am even expecting a bit of withdrawal. Have you ever stopped playing a game that you’ve played for 15 years? How did you handle the change?