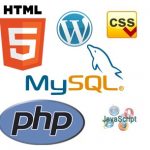 Back in the day, around 1997 – 1998, I picked up a book called “Teach Yourself HTML4 in 24 Hours”. It was my first glimpse into the world of web development. Thanks to SamsNet Publishing, I read that book cover to cover and referenced is so much the cover literally came off. CSS was still in its early stages and JavaScript was hated by everyone. Creating dynamic content was a test in perseverance and willpower. If I wanted a cool menu system, and I didn’t want to write it myself, I had to find something I liked on places like http://www.dynamicdrive.com or research how to do it using DHTML (which I don’t think even exists anymore).

This was the world I lived in for my early, static, web site development. It not only proved how difficult it was to make a website dynamic, but it also revealed just how terrible of a graphics designer I am.

After I finished college, word started going around about HTML5. It was boasted as the greatest enhancement in HTML development when combined with CSS3 ( and jQuery). They weren’t wrong. I have completed a certification in HTML5, JavaScript and CSS3 and I find myself enjoying web development immensely. Despite my complete lack of graphics design skills, I can now make buttons and fancy headers and never launch a graphics studio. It’s amazing what can now be accomplished with just a few tags and styles.