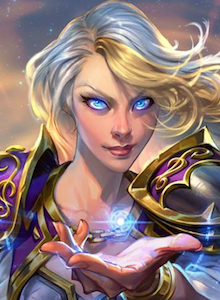 BlizzCon 2017 is only a few days away and everyone is positive that Blizzard will announce the next World of Warcraft expansion. Nobody, outside of Blizzard, officially knows what the next chapter will be about. We all have a pretty good idea. I could delve into different World of Warcraft expansion theories but that seems moot. Jaina has been eerily absent since the beginning of the expansion. She clearly doesn’t care for demon hunters. Bitch. Ever since she teleported out of Stormwind Keep, nobody has seen hide nor hair of her. So where has she gone? What has become of her?? Perhaps these are the expansion theories we can discuss.

There is also the fact that the recently unveiled BlizzCon 2017 key art featuring Jaina (see left). I think this is the biggest clue we all have as to the context of the next expansion. Perhaps a visit to Jaina’s home world of Kul’Tiras will be part of the new journey. The location of this human city-state is unknown as well as the status of its occupants. Perhaps Jaina has returned there to fight for the survival of her father’s legacy? Given her state of mind when she left Stormwind, who knows what has happened to her, especially if Kul’Tiras is in peril too. 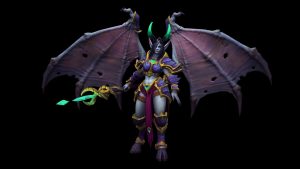 The popular theory is that Jaina has completely lost her mind. The death of Arthas, Gul’dan, the death of Varian and now demon hunters may have pushed her beyond her breaking point. Many think that she may be the new villain. The evidence that seems to support this theory is the Dreadlord Jaina skin in Heroes of the Storm. I think this is just wishful thinking, perhaps even a bit of player trolling. Rarely, if ever, has Blizzard used another title to prognosticate the future content of another title.

I agree that the Dreadlord Jaina skin looks amazing but I just don’t see how that fits into the lore. If Jaina does “go to the dark side”, I doubt it will be in the form of a dreadlord. In fact I’m more inclined to believe that she’s had her mind corrupted or controlled by some other nefarious being; which leads me to another Jaina theory.

Perhaps, while stewing in her grief from death and betrayal, she is captured. If Kul’Tiras is under siege, perhaps it is the nefarious beings razing the city that capture her. It will be up to us to seek her out and free her then assist her in restoring her father’s legacy and bring peace back to Kul’Tiras. I know there are probably some horde players that are just itching to take out Jaina; therefore to appease those neanderthals she could be mind-controlled whom we have to fight to free her mind.

A raid encounter in which we fight Jaina would be really interesting. Some of the more interesting fights have been echo’s of heroes (like in the End Time dungeon) or disillusioned heroes (like Cenarius in Emerald Nightmare). Or we could all be completely wrong and Jaina just returns in the next expansion, but has nothing to do with Kul’Tiras or her.

The truth will be known November 3rd.

Win or Lose the Cubs are Awesome