Redshirts by John Scalzi
My rating: ★★★★★
(Click here to see the Goodreads review)

I’ve been wanting to read this book for a while but something else always came up first (mostly the Dresden Files books). I’m glad that I finally got around to reading it. I knew the premise of the book going in and avoided all of the spoilers. I will try to remain spoiler free of my Redshirts book review.

Also, some interesting trivia about the author, John Scalzi. He was a creative consultant for the Stargate Universe live action television series.

While I am a huge Star Wars fan, I still have respect for the Trek. I’m quite familiar with all of the Star Trek tropes so I was looking forward to reading this book. It’s a parody of the classic “Red Shirt” Star Trek theme (i.e. the red shirt always dies). The premise here is that Andy Dahl, a “red shirt”, stumbles on to this suspicious coincidence and he’s determined to figure out why it’s happening. Hopefully, before his inevitable demise. What he discovers is far more unbelievable then he ever imagined, and convincing his other red shirt friends is even more difficult.

The way in which the author addresses this common Star Trek theme is a lot more meta than I was expecting. In fact, at first I wasn’t sure if I liked it. However, as I kept reading I began to understand the allegory of it. I did enjoy this book and that last chapter, the one right before the first CODA, is the best. Chapter. Ever! It definitely breaches the fourth wall but it’s probably one of my favorite chapters of ANY book. I recommend this book to any Star Trek and/or sci-fi fan. It’s a fun read; just keep in mind it’s a parody and try not to get too hung up in it’s conundrums.

View all my reviews

I Still Respect the Trek

April 5th is “First Contact Day”; for those of you unfamiliar with geek canon, First Contact Day is a Star Trek holiday. It’s the day Earth launches its first warp-capable rocket, in 2063. So the actual First Contact Day is still 43 years away. So now you’re probably wondering why I’m talking about Star Trek. I am an avid Star Wars fan after all. Despite my loyalty to “a galaxy far far away”, I still respect the Trek.

How Do I Respect the Trek?

I remember my dad introducing me to Star Wars but I can honestly say, I don’t know how or when I was introduced to Star Trek. If I had to wager a guess I probably stumbled upon an episode of The Original Series or The Next Generation while watching TV. It probably wasn’t until I met my good friend Nathan (around middle school) that I began to appreciate Star Trek more. He is the proverbial “Trekkie”. I hadn’t seen any of the movies in the theater until he and I met. After which I’m pretty sure I saw several movies starting with Star Trek Generations.

He and I were roommates in college where we often binged on Deep Space Nine. Ultimately DS9 became among my favorite of the Star Trek television series. The recent Picard series is now a close second. I own all the movies and I love the music, though I’m not as inclined to listen to it as often as I listen to a Star Wars soundtrack. I enjoy the action and adventure of Star Wars however its more about the science that I enjoy in Star Trek. Lightsabers are not scientifically possible however warp drive and even teleportation have more real life credence. I also happen to share a birthday with the late Leonard Nimoy (RIP).

While I will often wear a Jedi robe and wield a Force FX Lightsaber, just for fun, I still enjoy celebrating Star Trek. First Contact Day is one one example. I often try to squeeze in a few Trek movies, but I almost always watch First Contact (for obvious reasons). 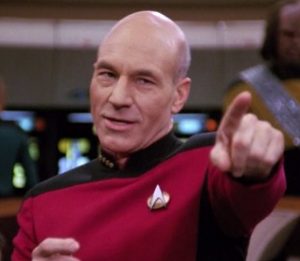 “Of my friend I can only say this. Of all the souls I have encountered in my travels, his was the most human” 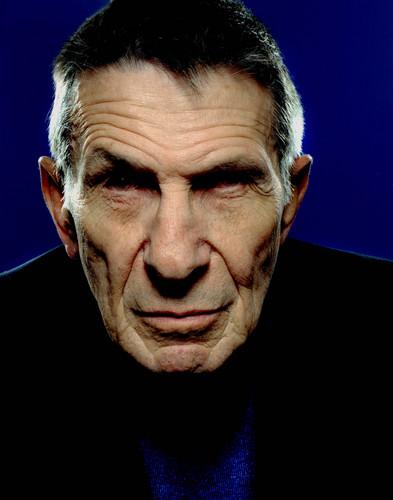 Synopsis: As a result of Kirk’s decision to violate the prime directive to save Spock’s life, he is disciplined and demoted (in true James T Kirk fashion). However a vengeful “super soldier” seeks retribution against Star Fleet which throws the crew of the U.S.S. Enterprise into a tumult of scandal that brings Star Fleet to the brink of war. Their actions and decisions will test their resolve, their friendships and the lengths they are willing to go for the “needs of the many”.

Biggs’ Review: I had to watch the first movie a couple times to get use to the alternate timeline. There are a couple concepts I’m still trying to become adjusted to (ex: the “love story” between Spock and Uhura). Now with that said, I thought this movie was amazing. I have to say that watching Karl Urban portray Bones (my favorite of the original crew) is worth it that in of itself. He is spot on, as if the soul of DeForest Kelley had been transferred into Urban’s body.

I was skeptical when Benedict Cumberbatch was cast as Kahn. He doesn’t exactly look anything like Ricardo Montalban (opposite body types in fact). I stand corrected. I almost like Cumberbatch better as a villain then I do as a hero (i.e. Sherlock Holmes – which is phenomenal). So I would say that if you don’t see it for Karl Urban, see it for Cumberbatch.

(to, lovingly, steal @TheRealNimoy‘s sign off, albeit fitting) LLAP

In Biggs On, General Cogitation

One of the biggest causes of nerd quarrels is the debate about which franchise is better; Star Wars or Star Trek. While from a fictional perspective these two are vastly different, they do have at least one thing in common. You can not deny that both have extremely loyal fans (some probably border on creepy). Personally, I’m probably a Star Wars nerd and a Star Trek fan.

I’ve loved the Star Wars movies (all of them) since the first time that I saw them. I’ve seen the movies enough times that I can probably recite just about every line. I’ve purchased a years wages worth of collectibles. I’m probably borderline obsessive. The amount of useless minutia I know about the Star Wars movies and universe would paint me in a pretty pathetic light, whereas what I know about the Star Trek movies probably isn’t any more then what I might know about any other movie.

There is no doubt that I do love Star Wars far more than Star Trek and while I will defend the former as the better franchise I admit there is something the Star Trek universe is far better at. The stars from the popular movies and TV series are probably some of the most sociable celebrities on the Internet. You can expect a joke or witty post from George Takei on a fairly regular basis on Facebook. You will see tweets from William Shatner, Leonard Nimoy, Brent Spiner, Jeri Ryan, and more quite frequently. These folks are often the highlight of my day.

I have to admit, these folks really give the Star Trek name a sense of community. I really wish the Star Wars fans had the same kind of extraordinary ambassadors. Most of the time Star Wars fans are bashing George Lucas (who, despite his faults, is responsible for creating the films and they wouldn’t exist without him) or criticizing one another because they did, or did not, like the prequels.

We definitely need more Shatner’s, Takei’s, Ryan’s, Nimoy’s, Wheatons, etc who are not afraid to connect with their fans. These folks were already icons but by sharing their nerdy enthusiasm I think it further enriches the community. My only ask of these wonderful people is that they never stop what they are doing both socially and professionally. All of you, even those I failed to mention, enrich our culture and our lives.

If Mr. Nimoy would allow me a small liberty I bestow the appropriate blessing, with all sincerity, to “Live Long and Prosper”.