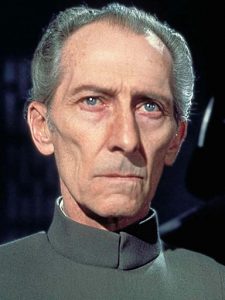 How Much Do You Know about Peter Cushing? Star Wars fans know him as Grand Moff Wilhuff Tarkin from A New Hope. If you’re not quite “Star Wars savvy” to know which one is Tarkin, he is the Imperial leader that ordered for the termination of Leia and the destruction of Alderaan (see picture on the right).

“I try to consider what the audience would like to see me do and I thought kids would adore Star Wars.”
– Peter Cushing

I’m sure it’s a generation thing but Tarkin is the only role I know Peter Cushing played. Granted, he was 64 years old when Star Wars was released so, obviously, he’s had many roles in his career. I was curious, so I dug into his filmography. He has quite the distinguished career.

From Darcy to Sherlock

Peter Cushing passed away in 1994 and over the course of his 81 years he’s been in 130 movies or TV series. What I found most surprising is, of the 130 films/series, 50 of them were horror films. It seems he had a penchant for the creepy and scary. In fact, among his horror accolades, he played some iconic characters. Baron Frankenstein and Van Helsing are two of the more well known characters in the genre.

It seems that when he wasn’t trying to scare the audience, he was sleuthing. Yes, Peter Cushing was Sherlock Holmes in several well known Sherlock stories (including The Hound of Baskervilles). His archetypal portrayals also extended to the prideful Mr. Darcy in a Pride and Prejudice series in 1952 and the Sheriff of Nottingham in 1960.

However, I think the role that surprises me most of all was that of Doctor Who. In 1965 and 1966 two Doctor Who movies were produced: Dr. Who and the Daleks and Dalek’s Invasion Earth 2150 A.D. in which Peter Cushing was the beloved Doctor. Hopefully I can track down these movies and watch them.

In fact, I think I need to track down several of his other films; and not just the well known characters. If there is any Peter Cushing film you’ve seen and would recommend, please leave a comment.