Now that we have all had time to process the heartbreaking passing of Stan Lee, it’s time to dedicate a post to his legacy. The image to the right is one of my favorite, of the thousands of memes folks are sharing since his death. The truth in the image is indescribable. Only one other being has ever created a universe as massive and powerful as the one Stan Lee created. He has been inspiring us for 95 years so he was no spring chicken. His passing should come as no surprise, but we grieve the loss of such an extraordinary man. RIP Stan Lee. [… Click to Continue …] 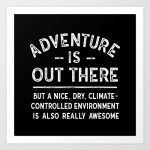 I’m a homebody. I think many of my friends, family and co-workers don’t understand what that means. The definition is as simple it sounds “a person who prefers staying at home.” When I was in college I did attend quite a few parties and football games; I even helped start a tailgating tradition that is still going to this day. College were my gregarious years, all that is different now. I am, undoubtedly, an introvert and for introverts, gregariousness is optional. I don’t mind small social gatherings, as long as they are short. In large social gatherings I eventually feel uncomfortable, even among my peers. I hate cliché small talk. Why [… Click to Continue …]

Here it is folks! The final Rogue One trailer before its December release! I reiterate, this movie is definitely a movie for the fans. I do not expect it to produce the same box office cash as The Force Awakens. After watching only four seconds into the trailer and I was amorous! Michael Giacchino is the composer for Rogue One while John Williams continues to focus on the main story line. However, I think the score is going to be just as good as a Williams score. Jyn is going to be a fantastic new Star Wars hero and Donnie Yen looks to be as much [… Click to Continue …]

My favorite type of sitcoms are, what I call, highbrow comedies. Fraiser was the first, and will always be, my favorite highbrow comedy. I enjoyed it because the dichotomy that people with an extensive vocabulary are not necessarily haughty or persnickety. Despite their affluence they still found themselves in the same awkward predicaments as Ross, Rachael, Monica, Chandler, Joey and Phoebe. When Fraiser ended in 2004, after 11 seasons, I thought it was the end of highbrow comedy, until I found The Big Bang Theory. I was surprised to learn there are other individuals like myself (i.e. geeks) who felt the show made a mockery of geeks. I disagree, [… Click to Continue …]

Remember us; from 20 years ago? I know you do. We were the daily mugging. It was never about the lunch money or the dress shirts. We were bullied because we were smarter than you, because we could thrive without trying, because you felt threatened by us. We warned you to be kind to us because you should feel threatened. We had many mantras. “Be nice to geeks, you’ll probably end up working for one” “Geeks, will one day, inherit the Earth.” “Geeks rule the World” Well now the geeks have inherited the Earth, and we remember! Our minds are steel traps. We haven’t forgotten who bullied [… Click to Continue …]

How many geeks do you know and what hobbies do you assume they have? If you are a geek, you’re not allowed to answer that question. I’m sure when one thinks of the geeks they know they probably assume computers, video games and/or books are their hobbies. You’re probably right, those are likely among their hobbies but most of us are probably ADD or ADHD and often have far more eclectic tastes outside our [presumed] nerdy sphere. You might actually be surprised to learn that we do have hobbies outside the typical nerdy genres and a lot of them might actually be outdoors (despite our fears [… Click to Continue …]