The madness continues. When we last spoke I calculated the possible percent of the population that has been infected with the virus. The total number of cases, per the CDC, on May 23rd was approximately 1.8 million. Which is approximately 0.54% of the population. Exactly two months later, to the day (i.e. July 23rd) the total cases, per the CDC, is at approximately 3.9 million. Using basic math we are now at 1.2% of the population with confirmed cases. The numbers have doubled! I admit that the 3.9 million confirmed cases is likely a combination of: cases counted multiple times (either accidentally or intentionally) antibody [… Click to Continue …]

So we’re at day … I don’t know, 70-something. Honestly, I’ve stopped counting. In fact, I’ve turned a deaf ear to nearly everything covid related mentioned in the news. I do appreciate that the local news station is now calling the update segment “The Recovery” after so many weeks of “The Coronavirus”. I keep scrolling past anything that appears doom and gloom on social media. There are too many people out there that are suddenly virologists and biology pundits. It’s sickening (pun intended). I hate to break it to you, but … A MEME IS NOT AN ACCURATE SOURCE OF VIRUS INFORMATION!!!! There are memes [… Click to Continue …]

The days and weeks blend together so much it’s difficult to remember specifically when this all began. The impact can still be felt as the lack of personal space continues to exacerbate tempers. I’m all about more family time but, even as adults, we need a little bit of time apart. Coincidentally that was the benefit going to work provides. There seems to be a glimmer of light indicating the end of the tunnel; however I’m trying not to get my hopes up. “Control. You Must Learn Control.” The promise of reopening the states is encouraging, but also feels premature. It’s a very delicate balance. [… Click to Continue …]

Is anybody still out there? It’s been a fortnight since we all holed up in our homes. We are several days into our “stay at home” order. Only essential errands are allowed, however outdoor exercise is still permitted. In fact the only reason I leave the house is to go out for a run. It sucks to be stuck in the house as the temperatures start getting warmer. The funny thing is I probably still wouldn’t go anywhere even if we weren’t ordered to stay at home. Perhaps the zoo I guess. Nice weather makes running more enjoyable. We can open the windows, provided someone [… Click to Continue …] 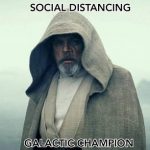 We are four days into “social distancing” (if you exclude the weekend). We only go to the store if its necessary. So far the cases in the city seem to be outside our area but I don’t expect that to last very long. Thankfully none of us are showing symptoms but that doesn’t mean the stress isn’t starting to get to me. Either the stress is going to kill me or my wife will as my temper has been short and explosive lately. I don’t know if its stress from uncertainty or from the disruption in my routine. Probably both. So far I don’t know [… Click to Continue …]