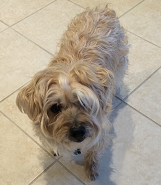 It’s been 7 weeks since we lost Gus. The first couple of weeks after his passing were especially difficult, but then we began noticing something peculiar. Our 1 1/2 year old Westie started exhibiting behaviors similar to Gus. So much so that it gives credence to dogs having souls and they can take possession of other dogs. Gus had exactly the kind of personality that even in death, he still gets what he wants. Therefore it would not surprise me at all if he will occasionally take possession of Gibbs.

It began with subtle behaviors that we just assumed Gibbs picked up on and we didn’t really notice it. For example, if we dropped food in the kitchen and we said “Oops”, Gus was in that kitchen immediately, hoping to reap the benefits of getting there before we picked it up. Gibbs never really responded, at least he didn’t seem as astute. However, we began to notice that he now responds with the same sense of urgency as Gus. Granted that could be Pavlovian behavior.

Gibbs also took a sudden interest in the rooster toy, which was a favorite of Gus’ since the day we brought him home. He has also suddenly decided to lay between our legs when we are reclined in the recliner; also a common behavior of Gus. In fact, it has become so eerily frequent that we started identifying when “Gus is driving”; meaning he has taken control of Gibbs’ body. Sometimes Gibbs will try to play with two toys at once; a ball and the rooster. This is Gus vying for control.

I know its actually a form of imprinting, but imagining Gus taking control helps keep his memory alive.