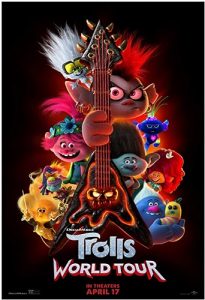 This is one of the first films to go straight to a streaming release instead of theaters due to the coronavirus pandemic. Coincidentally the movie studio made quite a bit of money. The films digital success was even discussed on the morning news. The numbers indicate that the movie studio probably made more money because of the digital release than they might have from a theatrical release. I doubt that dooms theaters … at least I hope not.

Be that as it may, the film itself was just OK. Most of the original cast reprise their roles, except Jeffrey Tambor as King Peppy. We rented it for my daughter’s birthday because she really likes Trolls. There are points in the film where you wonder if it was made while under the influence of illicit substances. Perhaps the same kind used when making the “Charlie, the Unicorn” videos. (At least the Charlie videos were funny).

It ends in the same old “love conquers all” sappy crap however I feel like the movie uses music as a metaphor. Everyone likes different kinds of music and no one particular genre of music should be eliminated. The movie makes the point that we should all respect each other no matter which music we listen to. Granted I don’t know if the metaphor is intentional but considering all the divisiveness in the world today, I think the same rule applies.

I watched it for my daughter, but I’m not in a hurry to see it again.