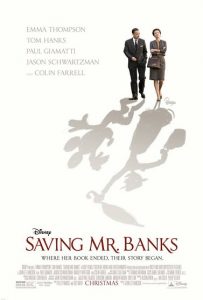 I realize this movie is 7 years old but nobody is really going to the theater right now so I might as well review something new I’ve watched. Perhaps others on the fence about this movie will finally reach their decision about whether or not to watch it.

Tom Hanks must be one of those actors that can be made to look like anybody. It’s an uncanny transformation to be able to go from Fred Rogers to Walt Disney. Personally I think his portrayal as Fred Rogers is nearly spot on, while he mostly just nailed the look and mannerisms of Walt Disney. He never actually sounds like Disney, however, that is not a deterrent in this film.

This movie is based on true events about the adaptation of Mary Poppins to film. Walt Disney has been pursuing the rights to produce Mary Poppins for 20 years but the author, P. L. Travers, refuses to give them up. Finally, in 1961, she agrees to travel to Los Angeles to oversee the adaptation of the film. However, she is not very forthcoming and really pushes Walt Disney to his wits end.

Maybe its my love for Mary Poppins but I really enjoyed this movie. Based on some of the reading I’ve done, the events in this movie, for the most part, are historically accurate. They took a few poetic liberties, but since they had the actual tapes of her and one of the Sherman brothers, you know they couldn’t bend the truth too much. I love how they incorporated some of the real life Disney culture into the film, such as the “man is in the forest” phrase animators would say when they heard Disney approaching.

There isn’t a lot of humor in this, it’s pretty much your typical heart-strings drama however it gave me an immense amount of nostalgia. I doubt the real P.L. Travers would ever approve of this film but it’s really interesting to see the story of this beloved Disney classic was, almost, never made.

I definitely recommend this movie, especially if you are a Disney fan and/or love Mary Poppins.

It is the mark of an educated mind to be able to entertain a thought without accepting it.