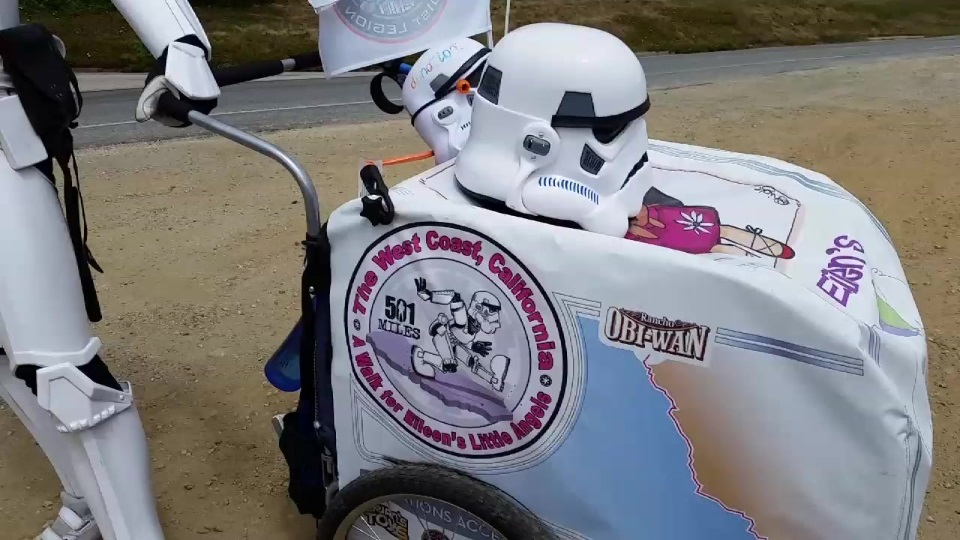 Issue 121: The biggest Comic-Con of the year, SDCC, was at the Anaheim Convention Center July 9th-12th! I tell you, some day I have to go to this event just to say I was there. If I raise my kid(s) right way they will also want to go so perhaps they will be my way to get out there! Personally I’m not into cosplay, however if they wanted to dress up then I would certainly oblige. Speaking of cosplay, did you see the endearing story about the guy that walked 650 miles to Comic-Con dressed as a Stormtrooper in memory of his wife that had recently passed away from cancer? It is proof, once again, that geeks have some of the biggest hearts! There is more information on Eileen’s Little Angel’s Foundation on Kevin Doyle’s website.

So, were there any goodies to talk about? I’ll say there was! I think everyone might have been pretty excited about the status of the Warcraft movie, including the little teaser Legendary released (which, allegedly, looks better using their app) which might just give you goosebumps. Unlike the past couple of issues, this one is not dominated by World of Warcraft updates. In fact, other than the Warcraft movie, several of the interesting posts are about lesser known, or new, titles. For example, the updates coming for Dragon Age: Inquisition or the launch of new titles like Skyforge and sequel news for Mirror’s Edge. There is even some SWTOR, FFXIV and Baldur’s Gate news (yes, Baldur’s Gate; talk about a blast-from-the-past). I try to provide news as diversely as I can so hopefully you might find something new and interesting to read about in this issue. KCGO.

Posted 7.7.15 – BioWare will be offering new DLC for Dragon Age: Inquisition in the near future (if not by the time this is posted), however there is a catch. If you are not playing the game on a PC, PS4 or X-Box One then you are going to be out of luck. The latest content for the game will only be available on those platforms. If you had plans to upgrade your console then you will have nothing to worry about, otherwise you’re going to need to pay-up. This kind of makes me wonder if BioWare’s people called Sony’s people and Microsoft’s people and made a deal in hopes of forcing everyone to upgrade.
Kotaku post

Posted 7.7.15 – Prior to the start of Comic-Con there were rumors abound that the latest status of the Warcraft movie was going to be discussed at SDCC this year. Floating around on the Internet were a couple of possible new graphics for the impending movie. They do look pretty cool and the post I linked to has a couple of renderings for you to take a look at. They are pretty plain but powerful and don’t give anything away about the movie. It’s just a teaser image to get us all more excited for the film. The director has said the movie is nearly finished and has alluded to a trilogy.
Blizzard Watch post

Posted 7.9.15 – If you followed along at home last issue I mentioned a new MMO called Skyforge. If you picked up a founder’s pack then you can now begin playing the game.  If you have not picked up a founder’s pack, you still have time but once the game enters open beta on the 16th, it will no longer be available for purchase! Also, keep in mind that this is an open beta so “caveat gamer” but there will not be a data wipe when the game goes live.
Massively Overpowered post

Posted 7.9.15 – I haven’t played the orignal Mirror’s Edge so at first my mind didn’t jump to “Faith” being a character in the game, so its a clever marketing play-on-words. If you haven’t played it either, Faith is the game’s heroine. The Collector’s Edition of Mirror’s Edge Catalyst will include a statue of Faith as an adult juxtaposed to a Faith as a child. I have heard that Mirror’s Edge is a pretty decent game and Catalyst was announced at E3 this year. You can see a picture of the Collector’s Edition in the provided link.
polygon post

Posted 7.9.15 – The upcoming SWTOR expansion, Knights of the Fallen Empire, will not only have big changes in the story but Bioware is making some pretty interesting changes to flashpoints and operations. For example they will be implementing a solo mode for storyline flashpoints to help facilitate leveling. Also, there will be not be a new operation added to the expansion, instead all existing operations will be boosted up to level 65 with appropriate, corresponding gear. Ugh! Now I want to play SWTOR again!!! (Stupid adult responsibilities taking all my money!)
Massively Overpowered post

Posted 7.10.15 – Who knew when FFXIV was named “A Realm Reborn” that it, in-and-of-itself, would be reborn after a spectacular launch failure. I think everyone was about ready to write-off this game but recently it hit 5 million players! When World of Warcraft was at its prime it was around 11-12 million players, so we are talking nearly half the WoW player-base. I don’t know about you but that is a pretty amazing comeback. Heavensward has, apparently, revitalized the game, like a phoenix from the ashes, with some allegedly great content and storytelling. Have you played FFXIV? What are your thoughts?
Gamechup post

Posted 7.10.15 – Now we are really getting nostalgic as Beamdog just dropped a pipe bomb on us all and announced a new Baldur’s Gate! The new expansion pack for the 17 year old game will be called Siege of Dragonspear and it will take place between Baldur’s Gate 1 and Baldur’s Gate 2. I have never played either BG but I’m excited about this announcement just as a gamer geek. How often does something like this happen to a game as timeless as Baldur’s Gate. I think everyone is going to be watching Beamdog very closely now waiting for more information.
Kotaku article
The MMO Times is a post I put together periodically of different MMO news articles that I think are interesting, fun and/or exciting. If you are interested in receiving these posts in an e-mail please click here to subscribe.