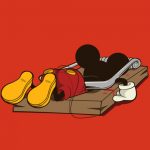 I started by giving Disney the benefit of the doubt when we all heard about its acquisition of everything Star Wars. The latest news has me wondering if my trust was misplaced.

If you haven’t heard yet, Disney is shutting down the LucasArts division, thereby throwing 150 programmers into unemployment. If that wasn’t tragic enough, all those great Star Wars titles are now a thing of the past, any projects that were in the works (ex: Star Wars 1313) has been canceled, and it leaves me wondering what will happen to existing titles that relied on the LucasArts backing?

This isn’t the first victim of Disney’s chopping block; remember they are ending the Clone Wars series. It’s ironic that the company that is responsible for creating childhood memories, is slowly dismantling mine! I’m now legitimately concerned about SWTOR because I was just starting to get back into that game. The Clone Wars series was highly successful so obviously how well a product is doing doesn’t mean its safe from Disney executives. The tumultuous start of SWTOR might be a blemish Disney doesn’t want to salvage especially now that LucasArts is gone.

I’m angry that all those programmers that developed so many great titles are just cast aside like dirty laundry. I certainly hope it was an issue of redundancy that often accompanies the purchase of another large corporation. As far as the titles are concerned I hope that Disney will absorb them into their collective of video game media and try to keep those titles alive and functioning.

Disney is doing the gamer and Star Wars community a huge disservice. I hope they plan to make it up to all of us but it damn well better be something extraordinary! Something akin to the invention of Mountain Dew and Cheetos!

2 Responses to “Mickey Mouse is Dead to Me!”