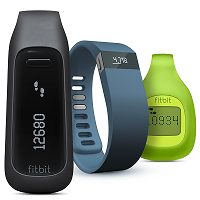 I have been using the same FitBit for over two and a half years now so losing it would give me a great deal of angst. I have probably convinced dozens of friends and family to get their own FitBits and it sometimes baffles me when they say they can’t find theirs (I’m very OCD about checking my pocket probably once an hour for my FitBit, even if I have been sitting for an hour). So the obvious excuse, when I taunt them, is they “lost it” *sigh*

Well now that excuse is no longer valid. An update to the phone app a few weeks ago will now allow you to link multiple devices to one account, including your phone. You can now add your phone to your FitBit account as a “Mobile Tracker” and it will record your steps just as your FitBit would (granted I don’t know if the accuracy is the same).

If you don’t know how to hook up your phone as a tracker, I can help you out (unless you have already performed a search on Google and found the answer in the FitBit forums). You will need to have the FitBit app installed on your phone which you can get from the App Store or the Android Store.

Once you have the app installed and you have launched it:

This should set your phone up as a tracker and it will only track the basics (i.e. it won’t track sleep, stairs, etc). I use this option when my FitBit is charging and I am still going to be somewhat active – because every step counts! Once it has finished charging (or you find your by gone FitBit) I would remove the phone, which I recommend as only one device can be tracking steps at a time. Steps from all devices will be aggregated on your FitBit account.

So there you have it. If you have lost your FitBit or its charging, and you have a phone that supports all the functionality of the app (I believe the FitBit app still has functionality issues on iPhone 4) then you no longer have an excuse for your lower rank on the leader boards 🙂

Keep Calm and Walk On!