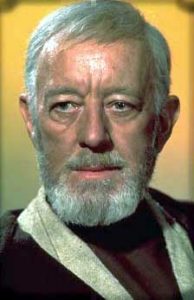 All right, we talked about two bad guys so let’s cover some neat trivia about a good guy. The good guy! Of all of the good guys in Star Wars, I don’t think anyone compares to Obi-Wan Kenobi (except, perhaps, Yoda). The man endured the loss of his best friend/brother to the dark side and even witnessed him slaughtering younglings. Satine Kryze, the woman he cared about most, is murdered right in front of him. He is betrayed by his first in command because of Order 66 and becomes, essentially, one of the last remaining Jedi. After ALL of that, he is never once tempted by the dark side. A Jedi as legendary as Obi-Wan Kenobi can only be initially portrayed by a legendary actor. So how much do you know about Sir Alec Guinness?

Sir Alec Guinness passed away in 2000 from lung cancer at 86 years old. In 1959 he was knighted by Elizabeth II for his contribution to the arts. He has a star on the Hollywood Walk of Fame and received a lifetime achievement award in 1980. He was only married once and has one child.

Unlike the previous actors, Sir Alec Guinness’ film career spans only 63 credits. However, similar to Peter Cushing and Christopher Lee, he has portrayed some pretty notable characters. I really think he is one of those actors more people need to talk about and appreciate. Before we get into his other roles, I want to share some behind-the-scenes Star Wars trivia. 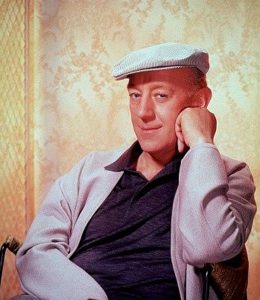 He apparently claims it was his idea that Obi-Wan Kenobi is killed in the first movie to reduce his involvement with the film. He never hated the movie but he did hate the fact that it’s the only role people knew him for despite all his previous roles. I, honestly, don’t blame him; as you will soon see, he had a great career. The other actors in the movies claim he was very professional and very kind, however he once told a fan to “never watch it [Star Wars] again”. Despite his mixed feelings fans, actors and even Disney continue to honor the man that brought us Obi-Wan. Ewan McGregor would spend hours studying his earlier films in preparation for the role of Obi-Wan Kenobi in the prequels. Disney and J.J. Abrams even **cast his granddaughter, Sally Guinness, in Rise of Skywalker to honor his memory.

As I already said, Sir Alec Guinness should be appreciated for more than his role as Obi-Wan Kenobi. He has a lifetime achievement award for only 63 films so you know there is more to this mans’ career than a decrepit hermit Jedi. In the 1940’s he was in a couple film adaptations of some fairly well known novels; Great Expectations and Oliver Twist. Fun Fact: the voice for Watto was modeled after Guinness’s performance as Fagin in Oliver Twist.

He’s in a few other movies you may have heard of; Doctor Zhivago, Lawrence of Arabia and The Bridge on the River Kwai. The latter two films both won Best Picture. Obi-Wan Kenobi is the role that would make him famous but seeing the distinguished career he had prior to Star Wars I feel inclined to go back and watch his other films.

Other Links and References

** just a note about this link, I don’t approve of Screen Rant. I’m not a fan, however this link does provide sufficient coverage of Sally Guinness’ cameo and only for that reason I included it.